This film will most likely slip onto rental store shelves rather quickly, due, in most part, to its miniscule cinema release. It’s a pity, cos The Night Listener is a fantastic quiet achiever. 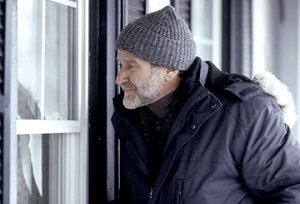 Ubiquitous as Williams is, this is most certainly his best performance of late. As radio ‘storyteller’ Gabriel Noone, he displays the perfect balance of sensitivity and naïveté. He’s a sad yet sympathetic figure, and it’s wonderful to see such a multidimensional character leading what could have been just another B grade thriller. Toni Collette has a field day as Donna, who, together with apparent child prodigy Pete (Rory Culkin) will draw Gabriel out of his comfortable abode and into a dark and somewhat menacing mystery. Collette’s most recent outings (Little Miss Sunshine, In Her Shoes, The Last Shot) have been fairly disappointing (due to the films rather than her performances), and it’s interesting to note that she was in the thriller Like Minds right after this. Here’s hoping she manages to wow us again sometime soon.

The interesting thing about The Night Listener is that it doesn’t try too hard to shock us with any revelations. Ever since The Sixth Sense we’ve been subjected to film after film trying to surprise us, and whilst some have succeeded and others have failed I think I speak for many when I say it’s about time Hollywood moved on. In The Night Listener the screenplay cleverly addresses the possibilities head on early in the piece, which means we can sit back and simply enjoy the ride.

There’s an unbelievable tension present throughout the film, and this is a credit to the performances and the film’s very construction, for there are very few ‘big’ things that occur. In terms of tone, it’s probably similar to Williams’ One Hour Photo, insofar as there’s an ever-present sense of dread that you can’t quite put you finger on.

Director Patrick Stettner was also responsible for The Business of Strangers, another great film that managed to slip under the radar, and he’s proving to have a wonderful talent for the understated, thinking person’s thriller. The Night Listener doesn’t have much up its sleeve (except for maybe a terrible title) but that’s actually a relief after the dual disappointments of The Prestige and The Illusionist. Here is a film that focuses on mood rather than twists and turns to draw the viewer in.

←The Hitcher Reign Over Me→