Terrence Malick isn’t exactly a prolific film director. After Badlands in 1973 and Days of Heaven in 1978 it was twenty years before he next took the helm, with the world war two flick The Thin Red Line. Now The New World finds Malick retelling the Pocahontas story, though thankfully this time round there is no painting with all the colours of the wind. 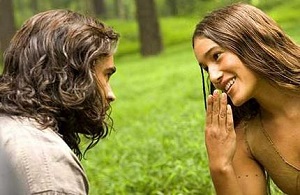 Colin Farrell (Intermission) is John Smith, one of a group of English explorers charging their way into what would become America, and this film has to be one of the most subtle and intelligent depictions of such a period in history. There are no big single gestures that propel our characters into war, but a multiplicity of interactions that eventually coalesce into a greater problem. Thus we see displays of inquisitiveness, understanding and general goodwill alongside stealing, mistrust and retribution. The first section of the film is more or less an extended montage, and we truly feel we are merely catching glimpses of the bigger picture.

Though he looks as if he’s constantly in pain, Farrell delivers a fine performance, as do Christopher Plummer (Syriana) and Christian Bale (Batman Begins), but it is relative newcomer Q’Orianka Kilcher that steals the show as Pocahontas. At only the age of fifteen (I didn’t believe that until I read it) she manages to breathe so much life into a character that speaks only occasionally in the 135 minutes. Every single movement, every look she makes manages to convey more than the rest of the cast put together. Certainly one to watch.

The New World is a film of stunning beauty, and there are moments that almost feel like cinematic poetry. Everything is perfect here – the performances, cinematography, dialogue. It’s just a little boring. A very slow film, it is not for anyone craving a little more momentum in their movies. Though I loved every moment of it, I just didn’t have the patience for a film like this. A very mature piece, there are no typical Hollywood puppeteer-like tugging of the heartstrings. Instead this tragedy plays out in an extended, sometimes disconnected manner, with dramatic moments coming from the most unexpected of sources.

Brilliant but tiresome, Malick’s film isn’t for everyone.