I passed this film many times in the video store, always finding something else that interested me more. I had heard great reviews, but there has simply been so many cop movies that I could never be bothered with another one.

So when I’d exhausted most of my other options, it was with much trepidation and mutterings of ‘this better be good’. Thankfully, it was. 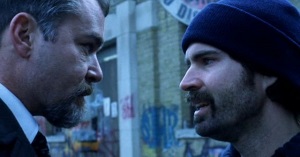 Narc works because it doesn’t simply contain usual good cop/bad cop dichotomy. The lines between right and wrong are wonderfully blurred in this film. There is also a depth to the characters that is rarely seen in the usual cop movies. (Okay, so I may be bad-mouthing buddy cop movies a little too much, but this film does hold up admirably to classics such as Turner And Hooch… and K-9 and its many sequels.)

The opening scene is suitably disorienting, and it’s quite a brutal moment to be subjected to without warning. This scene certainly sets the bar quite high for the rest of the film.

Like everyone has already noted, yes, Ray Liotta is great. (In fact he seems to have been stretching out a bit recently, and I quite enjoyed his comedic stint in Heartbreakers.) And, like everyone has already noted, yes, he is fat. Jason Patric is great also. Their feelings towards each other seem to oscillate between disdain and awe, and this gives the film its edge. It never settles firmly in one camp, jumping around the concept of the ‘greater good’.

The plot itself seemed of no particular importance. There is a mystery that in itself isn’t very interesting, and a conclusion that came as little surprise. But it’s the interaction between these two mentally – and increasingly physically – scarred men that makes this film so great.