I hate Sean Penn with a fiery vengeance. He’s just so damn boring. No matter what I’m watching, as soon as he appears on screen the film begins to drag. He’s one of the reasons I didn’t really enjoy 21 Grams. The main reason I held back from seeing Mystic River was because I knew he was in it. So finally I relented and hired the film (at least 3 or 4 people had personally recommended it). 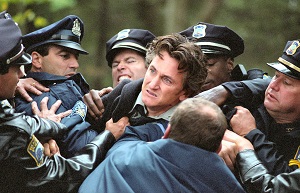 Mystic River is a solid piece of entertainment, but nothing more. Yes, Tim Robbins is amazing, but isn’t he always? He made Antitrust a great movie, rather than just a good one. The other supporting actors are very good (apart from Penn, who is boooooooooooring!). Laura Linney is completely wasted, providing nothing more than a piece of moving scenery until a strange little scene towards the end that seems slightly out of place.

The story is average (and vaguely Stephen King-y). It’s interesting that Eastwood can do a film like Blood Work (which was universally canned) and then go onto Mystic River. I’m surprised such high calibre actors were interested in the project, considering his other recent ones have been so poor (Absolute Power also springs to mind). But then again this was the man who directed A Perfect World (a film that was previously in my top ten) so he certainly seems to be a hit and miss kinda guy. Eastwood composed the score in Mystic River, something he’s been doing in his films for a while now. Unfortunately he falls back on his old technique of having the same 3 minute theme played over and over again. He’d do much better if he actually got someone else to provide the music for his films.

Like most Oscar contenders, Mystic River is a very ‘safe’ film for Hollywood – it doesn’t take us anywhere new nor does it have any surprises.