My Life Without Me is an interesting film to review – there is a constant tension between hating and loving the lead character that makes watching it a real struggle.

So, what would you do if you found out you only have three months to live? Mourn your time lost? Wonder “Why me”? Not for our hero Ann, who calmly sets about doing the things she’s never done – limited as she has been by having her first child by 17, her second by 19, and living in a caravan. Some of the tasks are simple – like “speak my mind”, or “get fake nails and a new haircut” – others are a lot more complex. In setting out to achieve these things, with scant respect for the feelings of those who love her, Ann is starting a narcissistic spiral. The trick that Isabel Coixet pulls, is to make us care for her nonetheless. And really, can you blame her? Ann has faced an awful lot of growing up, and missed out on a lot of experiences we take for granted, and she only wants to try some of them before she dies. Is that really so bad? I guess if she were a 40-ish woman, it would seem worse, but the attempt to live the youth she missed out on before dying, coming from a 23 year old who seems to do such a good job of meeting her responsibilities, seems more valid. Even if she hurts those she loves and cares for so much, we can almost forgive her, as she really does seem to try to look after her young family to the best of her ability.

The fatal decision – to keep her sentence to herself, thus taking away the chance for her loved ones to say their goodbyes – is quite selfish, and the film is a little dishonest in not showing us the fallout of her death. How did her husband, or worse her children, react on finding her dead in the bed? Had they known it was coming, maybe they would take it better? By skipping to happy scenes of future fun and play, Coixet fails to acknowledge that Ann’s choice has some pretty awful ramifications.END SPOILERS

Sarah Polley is amazing, again, as Ann, the young woman at the centre of My Life Without Me. I can’t remember seeing her put in a bad performance in anything she’s been in, and she stays true to form here. Had Scarlett Johansson not recently gone ballistic, I’d suggest Sarah Polley was the next big thing.

Mark Ruffalo is wonderful as Ann’s love interest, revealing a wounded soul waiting to be healed. He gives Lee a depth and kindliness, the perfect foil for the self-focused acts of Ann. Speedman shows he can actually act a little – my experience of him had been pretty much limited to Underworld – playing Ann’s faithful husband almost perfectly.

Were the acts of this person not so abhorrent, you could really love her for her quiet strength and dignity. Unfortunately, her decisions, whilst perhaps understandable and forgivable, are not ones I feel comfortable with.

I’ve always had an enormous amount of respect (and indeed been in awe of) Sarah Polley for a long time. She had her first ‘mainstream’ performance in the above average Dawn of the Dead, and My Life Without Me delves into more familiar ‘arthouse’ territory. 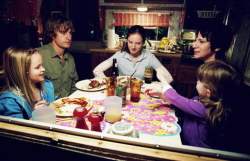 As usual Polley gives a spendid performance in the lead role. Always exuding a supreme amount of confidence, she appears wise much beyond her years. The honesty and simplicity of her performance lends power to My Life Without Me. Mark Ruffalo is okay – sometimes he really impresses me, and other times I barely notice him. He doesn’t seem to be one for consistency regarding quality of performance, but he’s certainly playing to type here. Amanda Plummer was great as usual, although I didn’t really see the point of her character.

With regards to Ann’s ‘abhorrent acts’ I disagree with Mark entirely here. If you dig deeper into her actions I think you find that this was an extraordinarily giving person.

This is a very sad film, I was on the brink of tears within the first fifteen minutes. That being said, My Life Without Me is an uplifting film. It’s interesting to note that there are no twists or turns in this film. It felt more like a tone poem rather than a script concerned with taking the audience on a ride.

Most importantly this is a film which shies away from cliché. In an interview on the DVD Polley points out that this film is an oddity for it portrays people of a lower economic standing as ordinary, intelligent and caring people – rather than poking fun or smirking at their oddball habits and simple minds.

My Life Without Me is a brilliant film, simple yet effective, beautiful yet heartbreaking.
Review by Stuart Wilson

My Life Without Me