Must Love Dogs is pathetic at times, predictable and unashamedly soppy. But I’m ashamed to say that it’s highly enjoyable also. Much of this is due to the fantastic cast. We all know John Cusack has been involved in far more edgy projects (Max, Grosse Point Blank and High Fidelity), however he’s as funny and charming as ever in the role of Jake. Diane Lane is a perfect match, and somehow manages to look a hell of a lot younger than she actually is. Together they light up the screen, to the extent that the film drags whenever they’re not on together. The supporting cast is exceptional also, with the only dud appearing in the form of Dermot Mulroney (The Wedding Date), who seems to be doing his best to impersonate Sylvester Stallone. Elisabeth Perkins (All I Want (Try Seventeen)) and Stockard Channing (Le Divorce) both deliver excellent performances and veteran Christopher Plummer (Alexander) is of course brilliant. The entire cast give their all in what is essentially a derivative piece of fluff, and together have fashioned quite a guilty pleasure.

There are times when the humour falls flat on its face, but also several classic moments that will remain with me for a long time. Sure, a lot of it doesn’t make sense, but nobody said this was realism. One thing that annoyed me for most of the running time was the awful soundtrack. It was filled with some of the most pathetic and/or obvious songs, and the moments when the music was in the forefront grated terribly. That being said, this isn’t a subtle movie on any level, and it spent a lot of time beating us across the face with the narrative and characters’ motivations.

I must point out that the audience LOVED this film. I’ve never heard people emote quite so forcefully or loudly – there were guffaws aplenty. The worst part was that all the noise, whilst annoying, was evidence that everyone was truly paying attention, so Mark couldn’t even get his shush-thang on.

Intelligent or insightful? No. Entertaining? Absolutely.

With an insight into the trials of dating in your 30’s and 40’s not commonly seen in a Hollywood ‘world’ obsessed with teen comedies and youth generally, Must Love Dogs at least tries to offer something different. That it fails to completely succeed is a shame, as it has enough heart and appeal to make it a very enjoyable film.

Diane Lane is Sarah and John Cusack is Jake – both are recently divorced and 40-ish; neither is very keen to try to ‘get back out there’. ‘I’m benched’ Jake tells his friend and lawyer Marc. Sarah’s family, full of young couples who can’t understand why their sister won’t try again, enter her in an online dating service. Both seem to find the dating scene so difficult at their age – they chafe against expectations, wishing their soulmate would appear without them having to work too hard to find them, and mostly fearing they never will. 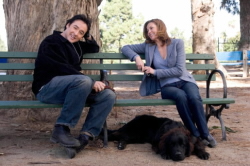 These hopes and fears are instantly recognisable – my own experiences as a single in my early thirties resonate throughout… friends who want to set you up, others who can’t understand why you haven’t just gone out and met someone in a bar, still more who don’t realise that although you’re getting on you still have the hope of meeting your true love and having the dream life together.

That this movie is inspired by a book is not surprising – it is easier to write depth into characters when there are hundreds of pages in which to do so. The filmmakers have kept the elements of insight and experience that Claire Cook must have provided, and the leads are brought to life beautifully by Lane and Cusack. Both are exceptional actors, and they demonstrate the conflicting emotions these characters experience in their search so well. With fear, anxiety and insecurity, mixed with exasperation, frustration, hope and joy, the stars are given a full palette of emotional colours to paint with, and they produce wonderful portraits.

The deficiencies lie in the subplots, and the standard romantic comedy ‘spanner in the works’. For while Lane and Dermot Mulroney are also appealing as a couple, it never seemed likely that Sarah would fall for this particular suitor’s charms. This forced tension doesn’t quite work, and the film suffers for it. Stockard Channing and Christopher Plummer, whilst both giving their all, also feature in a subplot that seems to be either underdeveloped or just plain unlikeable.

The soundtrack – mentioned negatively in Stuart’s review – is actually one of the highlights. It does feature old standards and yet for these characters the songs work. The songs of their youth, or that of their parents, like Linda Ronstadt’s ‘When Will I Be Loved?’ and Sheryl Crow’s cover of the Cat Steven’s classic ‘The First Cut Is The Deepest’ – these songs inform the characters just as music selected for a film soundtrack should.

While in many respects Must Love Dogs is disappointing, John Cusack is an extraordinary actor, and paired with Diane Lane they form an onscreen couple of some charm. A little convoluted and unnecessarily distracted, this film does, however, have a thoughtfulness I appreciated. Perfect for a DVD night in with your significant other.