Weirdly, I find myself feeling sorry for Andy Serkis. It’s ridiculous, because since bursting onto the global stage as Gollum in The Two Towers, the guy has had an incredible run, acting in the likes of The Hobbit, The Adventures of Tintin, King Kong and Black Panther, having a hand in video games like ‘Heavenly Sword’ and ‘Enslaved: Odyssey to the West’, and being second unit director on The Hobbit films. But this is the first time he’s been at the helm of a big budget Hollywood movie. Soon after this film was announced, however, Disney signalled their own ‘live action’ version of The Jungle Book. And then released their film first, to critical acclaim… 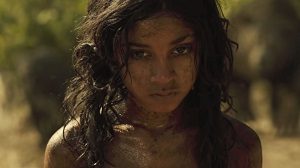 Unsurprisingly, Warner Brothers pushed this film back by 18 months or so, and it’s only now crept straight to Netflix. And I can see why they changed the release date, because this is very similar to Disney’s film. Or at least, the first 15 minutes are. At that point, I was prepared to switch off, so pervasive was my sense of déjà vu. But I’m glad I didn’t, because Mowgli quickly becomes an intriguing, if flawed, feature.

The first thing those familiar with the recent Disney version will notice is that Serkis et al went for a different visual style. The CGI animals are less photo-real and more caricatured. It means that they’re more expressive, to be sure, but it didn’t quite work for me. They all have a tendency to look a bit…off. If anything, it’s definitely more artistic than Favreau’s film, but it may bother some people.

The acting is uniformly excellent – particularly Christian Bale as Bagheera – and it must be said that Serkis is a great director. There are a dozen outstanding scenes here, even if it doesn’t hang together in toto. I’m not sure if they stuck to the script or went through reshoots and/or a particularly aggressive edit, but the narrative lurches forward more than once.

Most significant is the tone. It seems Serkis was determined to deliver a film that was less black and white and all shades of grey. Nobody is out-and-out evil. The humans encroaching on the jungle aren’t malevolent, nor are the members of the pack who bully Mowgli. Aside from Shere Khan, they’re all doing what they think is for the greater good. And even big, bad Khan is portrayed as aged and lame, his breath coming in ragged gasps.

All this is mature and well-written, but the film simply left me feeling bereft. When the credits rolled, it was a case of “everything was shit, but now it’s slightly less shit. Maybe.” And I’m not sure that’s what audiences were expecting. (Word to the wise – it gets very dark at one point. Almost Artax-level dark. Show this your kids judiciously.)

This does have something to offer those who’ve already seen Favreau’s attempt. Mowgli is a strange film, with some stunning VFX and powerful scenes. The tone misses the mark, however, and the pacing is slipshod.

Mowgli is available now on Netflix.