Sometimes you just have to see what all the fuss is about for yourself, you know? I mean, how bad could it be? Pretty bad, as it turns out… 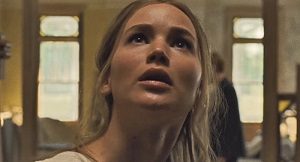 All things considered, I often enjoy Darren Aronofsky’s lesser-liked films. Noah had its moments, whilst The Fountain is one of my favourite movies of all time. So I was fully prepared to go against the grain with Mother!

The story sees Jennifer Lawrence playing a nameless wife to Javier Bardem’s “Him.” The two of them live in his family home, which was recently rebuilt after burning to the ground. Bardem’s character, a famous poet, is suffering from writer’s block. It takes the visit of a stranger to kick both the plot and his creativity into gear. And that’s where things get a little weird.

I think part of the frustration with Mother! has to do with audience expectations. As a friend of mine said, “I went in expecting Rosemary’s Baby. If I’d expected Mulholland Drive instead, maybe I would have enjoyed it more.” Mother! was indeed advertised as a kind of modern-day Rosemary’s Baby, and that’s how the first act feels – as if everyone’s in on something that’s being kept a secret from Lawrence’s character.

And she is reliably excellent in the role, even if her character’s experience quickly starts to wear thin. A lot of crap is heaped on her, and whilst she tries to stick up for herself, her constantly put-upon role grates after a while. Mother! sees Aronofsky in full allegory mode, and whilst there are no doubt lots of theories as to what’s actually going on, at the end of the day I. Just. Don’t. Care.

We don’t even get a reliably awesome soundtrack courtesy of frequent Aronofsky collaborator, Clint Mansell, for this film is almost completely without music. The cinematography is nice, though it absolutely refuses to pull back from extreme close-ups, and the use of visual effects is impressive, as is usually the case with the director’s works.

As the film finished and the credits rolled, I heard two things in the cinema. From one corner, a snigger. From another corner, a stage whisper of, “That was stupid.” Those two responses really sum up the film. Perhaps, in a decade’s time, this will get a stunning reappraisal, but right now I find that hard to believe.