These days our cinema screens are bombarded with CG kids’ films every school holidays, and this September is no exception. I only manage to drag myself to several each year, and I’m glad to say that I made the right choice with Monster House. 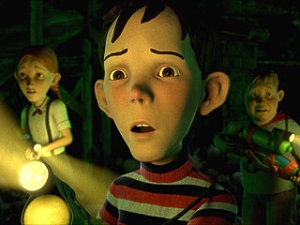 Ever since Toy Story most of these flicks rely on the idea that more is more – plenty of characters, and plenty of jokes, at least one every 90 seconds. Monster House breaks both of these rules by only having a small number of players, and is prepared to hold back from the laughs in the interests of solid character-based humour. I happened to see Loch Ness again just the other day (Ted Danson and Joely Richardson flick from ’96 if anyone remembers) and realised just how slow the movie is by today’s standards. It is far from perfect, but at least takes the time to build up to the (almost frustratingly anticipated) appearance of the creatures. Monster House is by no means as slow as that, but does deliberately lay out the crucial plot elements bit by bit until reaching a gloriously outrageous (yet at the same time satisfying) climax.

The movie is a little scary for young kids – there were a few squealing and covering their eyes, but overall it’s a NICE scary (nothing like The Witches adaptation which had me crying for days after I saw it as a youngun). The animation is stunning, finding the perfect balance between detail and cartoonishness. The textures mightn’t look organic but the expressions are brilliantly brought to life with motion capture – babysitter Zee not only talks but walks the same as Maggie Gyllenhaal. The camera moves and digital cinematography is stunning also – the filmmakers manage to perfectly harness the power of the digital medium without going so far as to be disorienting or distracting.

Monster House is showing in 3D in ONLY THREE CINEMAS in Melbourne, and unfortunately I had to see the 2D version. This selective presentation is in my mind pathetic – if you’re going to make a movie 3D then it should be 3D EVERYWHERE. Surely those geeky glasses can’t be that expensive to produce?

It wouldn’t surprise me if the original idea started out as a live action feature film, cos it certainly feels like one. In fact it’s the kind of yarn Stephen King might cook up for a younger audience.