George Clooney seems to have taken the decision to be the conscience of us all, with his recent output including Syriana, Good Night, and Good Luck. and now Michael Clayton. The Ocean’s series must provide financial backing for his more serious and less financially rewarding work. Michael Clayton (Clooney) is his firm’s ‘fixer’ – a lawyer, yes, but not a partner even after many years of service. His bosses have other uses for him… managing potentially ugly situations for top-notch clients so that they can continue on their corporate ways. He is ‘a miracle worker’ for these captains of industry who have strayed, even if he sees himself only as a janitor. In financial difficulty after his business interest in a bar goes south, and with shady characters wanting their money back, he is forced to compromise himself even further when his bosses demand he control a situation involving his mentor and friend Arthur Edens (Tom Wilkinson). Edens has spent six years defending agrochemical manufacturer U/North from a class action, and now seems to be having a breakdown – whether ‘nervous’ or of his conscience is the question.

Clooney shines in the title role, with his expressive eyes and face allowing him a hundred different emotions at a time. The conflict he experiences between self interest and self esteem has so damaged him he can’t enjoy time with his son, and it is easy to understand how he can see no clear way forward. Clooney encourages the audience to root for him but also to feel revulsion at his actions – it is only Clayton’s hope for something better (as expressed by his ‘get out’ business) that makes him human – but Clooney pulls off the trick of making us care nonetheless.

Wilkinson and Tilda Swinton are both excellent in support, and it is fantastic to see Sydney Pollack in another film after a relatively quiet time of it in recent years. His Marty Bach is suitably evil and yet engaging and charming such that the audience is left liking him just a little. Swinton’s Karen Crowder on the other hand is so ambitious as to be almost irredeemable, but the interesting choice made in writing is to give her moments of self doubt and crushing anxiety, such that she is not reduced to a simple caricature. This strength shows throughout the film, with most characters possessing good and bad sides and thus never allowing audience perceptions to become too solidified.

There is perhaps too long spent in the midsection, although each scene is relevant and contributes to the overriding thesis. That some of the choices seem obvious is perhaps part of the effect – the decision to show a sequence from almost the end of the story upfront before cutting back in time and then finishing beyond it allows the audience to know in advance where some of the intrigue is heading, but the bigger question we must face is also that faced by Clayton.

Michael Clayton is a solid thriller, although relatively demanding of its audience and therefore not suited to every viewer. That it could be enjoyed by many and still provoke thought is rare enough in a film coming from Hollywood, and for this alone it should be commended. 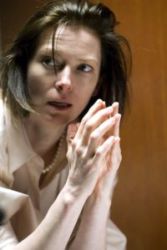 I’ve never been a big fan of George Clooney. I may be impressed with his politics, but I often find him kinda boring on the big screen. Here, however, he produces arguably the performance of his career. He’s detached and almost expressionless, but somehow manages to evoke more sympathy than any of his previous characters. It’s never explained exactly what he does as ‘fixer’ for Kenner, Bach and Ledeen, other than the fact that he seems to clean up all manner of messy legal situations, and that he’s very, very good at his job.

Tilda Swinton plays U/North legal chief Karen Crowder, and I can’t begin to describe how perfect her performance is. We’ve seen characters like this before, but never written or played with such vulnerability. The Karen we see in private and the Karen we see in public are completely at odds with one another. Tom Wilkinson too delivers a completely unselfconscious performance.

The final paradox was that the film itself unfortunately wasn’t very entertaining. I could appreciate the subtlety, the complete lack of redundant exposition and the calm approach to proceedings, but I was also rather bored. It is a beautiful film, and James Newton Howard’s score is fantastic, however the plotting is simply too relaxed.

George Clooney fans should be in heaven, and those who like a good cerebral film that doesn’t talk down to its audience will be satisfied. However some may realise that they’re really seeing a standard thriller dressed up with great writing and strong performances, and thus feel a bit cheated.