As you may have already heard by now, Metallica: Some Kind Of Monster is one hell of an entertaining documentary. I don’t know anyone who hasn’t liked it, and it certainly has been enjoyed by Metallica fans and ordinary civilians alike. That being said, I can’t imagine sitting through it a second time. It was fun but not the sort of thing that needs revisiting. Then again I’m sure there are a lot of Metallica fans out there that have undertaken repeat viewings of A Year And A Half In The Life Of Metallica doco… 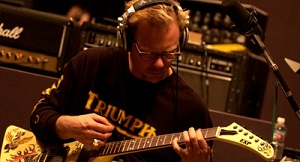 It’s wonderful seeing these men of metal sitting around talking about their feelings in a group therapy session. It also interesting to watch how addicted to the therapy they seem to become.

There are some great montages here, the best one during the opening credits, which includes the bad performing ‘Seek And Destroy’ over the years as the audiences get bigger and bigger.

There are a couple of superfluous scenes in this overlong documentary. Much has been made of the scenes in which Lars Ulrich, the drummer, sells all his paintings. I didn’t think that this really added too much. Then came the ultimate in self-indulgence: the scene in which the filmmakers ask the band if the documentary should continue to be made. We get to listen to one of the makers saying that ‘the album is what’s important’…as if they wanted to stop filming! Come on!

One of the more entertaining sequences features the bass player auditions, which featured the likes of Twiggy Ramirez and Danny Lohner (imagine either of them playing for Metallica…). Also seeing a reformed Hetfield return from rehab is quite strange (he wears glasses now!)

Some Kind Of Monster is a wildly entertaining look into the lives of some rich and famous blokes who worry that they don’t ‘got it’ no more.

Metallica: Some Kind of Monster