The Messengers is the Pang brothers’ first Hollywood film, and whilst it isn’t simply another remake, it doesn’t have all that much to offer. The brothers were responsible for The Eye (Gin gwai) in their native Hong Kong, and though I haven’t yet seen it, I’ve heard that it’s a stylish and effective (if not original) horror flick. It’s soon due for the obligatory US remake. 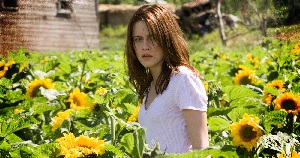 The Messengers has the usual setup – a (not so) scary opening followed by a family moving into a remote farmhouse where some spooky shit’s goin’ down. Kristen Stewart plays the teenage daughter in the bad books with her mum, and when we find out exactly why, it’s frustrating just how under-developed the plot point is. She’s great in the lead role, easily outdoing everyone else, in particular Penelope Ann Miller, whose performance as the mother is horridly awkward. At first I thought she must have only recently joined the family as a stepmother, so out of touch are her actions and responses. Dylan McDermott fares slightly better as the dad Roy, but to be fair to the cast the fault lies with Mark Wheaton’s screenplay, which feels like a first draft. The only thing it has to offer is a gimmick we’ve seen before, that only the toddler Ben can see the scary things.

When the Pang brothers hit their stride, however, they really get it right. There was one scene about halfway in that was as terrifying as it was simple. Easily the scariest thing I’ve seen in a couple of years, I heartily recommend horror aficionados check the film out if only for that scene.

The end of the film shames these rare positive moments, and the story goes that the studio not only ordered a re-shoot, but with a different director at the helm – and boy was it noticeable. All the stylish framing and interesting editing techniques vanished as we were left with a horribly unsatisfactory conclusion. Not only does it effectively vomit over all that has come before, but it’s simply dull. Plus there are noticeable inconsistencies as a consequence of the re-edit, most noticeable being Roy knowing the name of a character he’s never met.

With the occasional echo of brilliance in the first half of the film, one can only hope that the Pang brothers’ next project is better.

←Romulus, My Father Bridge to Terabithia→