It’s the Year of the Dog, apparently, with Marley & Me turning out to be a good companion piece (ahaha… ha) to Bolt. Here is another film about the bonds animals form with their owners, even if it happens to be about the world’s worst dog instead of one with a supersonic bark.

Based on the memoirs of John Grogan, it chronicles the ups and downs of a recently married couple throughout the period of their pet’s life. It’s a nice way to limit a life story, as it starts later than one would expect, and finishes earlier. In this respect it is better than the type of lifelong epic that usually has the potential outstay its welcome (think Forrest Gump or The Curious Case of Benjamin Button). 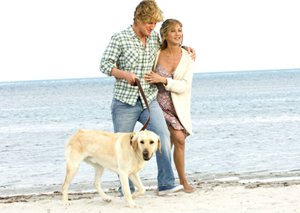 This is a film that really could have been brilliant. Unfortunately it doesn’t quite make it.

First mistake – Owen Wilson and Jennifer Aniston are the leads, playing John and Jennifer Grogan respectively. Now, these two are bland at the best of times. It’s not that they’re bad actors, per se… they’re believable, just totally lacking charisma. Aniston’s only memorable performance was in The Good Girl, and Wilson is good in a supporting role, but doesn’t really have the presence to be the leading man. Secondly – this film sits on the fence. All too often it seems that the existence of the dog is an afterthought. In many scenes, having the dog made little difference to their rather mundane lives – apart from providing the trailer with some cheesy pratfalls. I’ll give the real Grogan the benefit of the doubt, and assume that something was lost in translation – the scriptwriters I’m sure needed to cut out a lot of information, and probably chose the wrong bits.

The film is also visually bland, but that really isn’t an issue in such a genre. What is unforgivable is the soundtrack. It’s filled with the most recognisable, overplayed pop songs from the late 80s and 90s – every single one feels like a cliché.

All that being said, there are some diamonds to be found in this rather rough film. One particular montage sequence is fantastic – featuring home video-style footage accompanied by Owen’s voiceover as we whiz through years in minutes. I almost wished we’d had more of this, as it was a beautiful way to list the mundane moments in their relationship in such a manner that they became significant.

Then there’s the final act, which really is effective. Granted, you’d have to work pretty hard to make such material not work, but it does finish on a strong note, and it’s endings that matter, right? Well, at least that’s what I heard David S. Goyer say in a documentary on the Blade DVD. He effectively suggested that you can have the worst opening in film history, but it won’t matter if you have a great ending, because that’s what people remember. I’m aware of the irony – Blade‘s opening scene is far better than the climax – but it’s a valid point.

Marley & Me is rewarding in the long run, but it’s hard to recommend a film that hits so many wrong notes on the way there.