A long time ago, a friend of mine asked if I’d yet seen Maria Full of Grace. At least six months later, and probably nine, it is finally being released in Australia, and thank goodness! It is another topic, but why we are limited to seeing many new releases this length of time after those in America is beyond me – and yes, I accept this is a non-mainstream film, but Catalina Sandino Moreno was nominated for best actress at the Academy Awards for goodness sake, and we are seeing it now?? (As were Annette Bening for Being Julia and Imelda Staunton for Vera Drake, and we are only seeing those now too, so why should I be surprised?)

With that off my chest, finally seeing Maria Full of Grace allowed me to see what the rave reviews were about. Moreno is excellent as the main character, carrying this film entirely on her shoulders, and really stands out amongst some otherwise stilted and wooden delivery. She has a certain look – mixing innocence with bravado and intelligence – that makes her perfect for this role.She deserves all the plaudits she has received. For anyone who doesn’t know, this is not a happy film. Chronicling the life of the drug ‘mules’ – women who swallow pellets of drugs to enable them to be smuggled into the USA, then pass them once through customs – it is not a pleasant story. Otherwise faced with difficult lives and little promise of change, young Colombians can earn more than a years’ wage in one trip… if they survive. The pellets have the tendency to break open, which, given the amount of drug held in each one, means almost certain death. Some risk this to get out, others to get money for their family.

What leads Maria to decide to do this is shown for us quite clearly by director Joshua Marston. Pregnant at 17, forced to work de-thorning roses in abysmal conditions for a poor wage, Maria has very few options. Her natural intelligence, and her desire for something better, conspire to force her to do something extraordinary to escape. Her reactions are always natural and understandable, and the audience always empathises. This is a strength of this film.

Shot with hand-held cameras, Maria Full of Grace is not for anyone with a vestibular disorder – I felt dizzy and nauseous at times watching this poorly shot film, and I continue to resent this trend. Sure, the technique allows the feeling of reality to pervade the images, but if you can’t watch it, what’s the point?

Maria Full of Grace is not a fun film to watch, but it is a well-made tale, and is moving in its portrayal of life in Colombia. Whilst I don’t believe getting to New York will solve all of her problems, as this film seems to naively suggest, I can see why Maria may think it would. With an amazing performance in her first film, Moreno steals the show.

First of all, Mark is a whingeing little cry baby. The cinematography he claims made him feel ‘dizzy and nauseous’ is barely even worth mentioning. I was never once distracted by the camera moves in Maria Full Of Grace, and upon reflection a more traditional system of hundreds of camera set-ups probably would have detracted from the emotional purity and rawness of the narrative. There are films such as Prozac Nation which I think were actually hindered by the static and often bland long shot/mid shot/close up/reverse system. This is not The Blair Witch Project – it simply doesn’t look like The Matrix. I’m getting seriously worried about Mark and this advanced case of middle age, which seems to equate hand held camera moves with THE END OF ALL THINGS. It’s getting to the stage where he’s practically going to the cinema armed with a spirit level. Those traditionalists out there, never fear, Maria Full Of Grace would barely measure a 2 on the Richter scale. 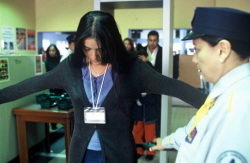 Now, with regards to the film itself, I wasn’t terribly impressed with this feature. First and foremost this film isn’t very enjoyable. It’s not for the squeamish or anyone who’d like to be blissed out with the ignorance of films such as Mona Lisa Smile. This is a film which sets out with an agenda to educate us to the choices facing people in countries such as Colombia, where opportunities are few and the dangers ever present. At times gut wrenching, this film was often painful to watch, and I mean this in a good way.

It seemed to have a lot in common with Lilja 4-ever, yet I wasn’t affected so profoundly as I was with Lukas Moodysson’s masterpiece. The main problem I had with Maria is that she seemed intelligent enough to know the choices she was making were not only bad but possibly deadly. Yes, these were extreme circumstances, but she didn’t give off the same innocence and naïveté that Lilja did.

Catalina Sandino Moreno gives a splendid performance, and I think in many ways the problems I had with this film lay in the writing or the direction. This is a film that will have limited appeal – a lot of people will wish they’d never seen it, but thanks to the Academy Award nomination it should get a larger audience that you’d normally expect for such a gut-wrenching tale of despair.

And now that I’ve seen the film, I am quite disgusted by the poster.

←The Life Aquatic with Steve Zissou The Manchurian Candidate→