The French filmmakers responsible for March of the Penguins must surely have a guardian angel looking down upon them. In producing their wildlife documentary of a year in the life of the Emperor Penguins of Antarctica, they have made the second highest grossing theatrically released documentary (in the US) of all time, with a total worldwide box office at time of writing of US$120.5 million.* This despite their film being no more remarkable than many other nature specials carrying the National Geographic imprimatur. Enlisting modern-day favourite Morgan Freeman to narrate the English-language version was a stroke of genius that may be responsible for much of the film’s success. His dulcet tones allow the narration to soar alongside the scenery, and he carries a certain authority within his voice that allows him to almost get away with what are, at times, frankly absurd descriptions of the penguins and their motivations for behaving in the way they do.

This is the most disappointing feature of a film that admittedly contains some remarkable footage of these incredibly beautiful creatures. In the attempt to describe their lives artificially in human terms, and in trying to add a false sense of the heroism of the penguin, the scriptwriters allow unreality to seep in and soil the images. Certainly, the life cycle of these animals is amazing enough, without the false romanticism added, and the film would have been far stronger if it simply allowed the penguins’ actions to speak for themselves. Instead, the audience must endure silly attributions of human emotions to what is really a case of survival at all costs.

That said, the underwater images are incredible, and the camera operators seem to have had amazing access to the penguins as they huddled together nesting for the Winter. We, the audience, are taken so close as to see the regurgitant material of the mother being fed to the offspring, or the first signs of the hatching of the eggs. The footage achieved is wonderful, and the heroism of those responsible should not go unappreciated – by enduring the time on the ice with the penguins, the French film crew have recorded a beautiful animal in the most difficult of conditions.

Were it not for the sometimes ridiculous nature of the script, March of the Penguins would be a great piece of educational material on the life cycle of the Emperor Penguin. It fits rather more comfortably, however, alongside Saturday afternoon nature specials, never seeming to be worthy of the ‘Sunday Premiere Movie Special’ status that seems to have been thrust upon it.

Okay so here we have the highest grossing documentary in France ever, and the second highest in the US (behind Fahrenheit 9/11), and the recipient of many awards, including the 2006 Best Documentary Oscar… and it’s a film about penguins. 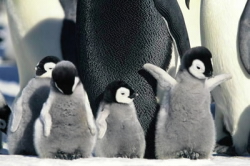 Now, don’t get me wrong. I like penguins. And I like documentaries. Sunday afternoon television wouldn’t be the same without David Attenborough’s authoritative yet enthusiastic tone, and a glimpse of the world’s creatures, in all environments from the tundra to the deepest oceans. But do we really need it on the big screen? With penguins? I mean, they’re so SMALL! I expect whale sharks or humpback whales on the big screen, sure. Or even creatures that are REALLY SMALL, like insects or sea dragons, usually too tiny for the naked eye to appreciate. But penguins? They’re… they’re… bird sized!

The cinematography isn’t even that extraordinary. It’s white. Really really white. I typically have a problem with nature doco editing – I’m always paranoid they’re creating a false sequence of events, usually apparent when the camera mysteriously changes angles. Not to mention the fact that documentaries have a foley department. Sure these filmmakers have probably done what has never been done before, but that doesn’t automatically make it scintillating viewing.

Morgan Freeman of course is a fantastic candidate for the English release version’s voice over – there’s something about his voice that instantly evokes the feeling that you’re being told a story by the world’s nicest grandfather. Unfortunately here he’s lumped with a script that is at times awful. Dumbing down is one thing, but suggesting that penguins love each other is going a little too far. Where’s the love when a bird terrifies a group of baby penguins deciding which one to eat, and the adults stand around looking embarrassed? Nowhere. It’s called SURVIVAL people, not love. A little anthropomorphising is okay, but March of the Penguins goes overboard. We might as well have had a Babe-like dubbing of cutesy voices (“Oh dear Phyllis… little Jimmy’s getting eaten. No, don’t look, it’ll just give him the attention he wants.”)

To be honest this isn’t a bad documentary, it’s mostly that I’m rather picky (and live 140 kms from Phillip Island, where you can go and watch the penguins waddle up the beach every day of the year). But all the same, I fail to see why this is worth forking out your 14 dollars for when you could just watch it on free to air TV. I’m sure this is the best penguin documentary film in existence. But all the same, it’s still a penguin documentary.

March of the Penguins