I first saw Mad Max and its sequel (Mad Max 2, aka The Road Warrior, aka Mad Max 2: The Road Warrior, aka Max’s Grand Day Out) in 2002 on the big screen. The first film was a little tough to watch at that time, owing to the budget restraints and technical limitations, but oh boy did the sequel knock my socks off. I remember thinking that George Miller’s action extravaganza really should get more credit for making Hollywood up its game with regards to action movies. It took risks, it didn’t hold back and was at times truly breathtaking. 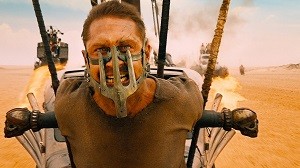 Fury Road does this x100. If you thought that Miller might have mellowed in his advancing years, after spending time on kids films like the Babe movies and Happy Feet, then you’d be wrong. This film is every bit as nuts as the originals. Perhaps more so. This is an action film that really doesn’t pause for breath. It’s practically one long car chase. It’s loud, explosive and awe-inspiring.

Max (Tom Hardy), forever a loner in this post-apocalyptic wasteland of a setting, crosses paths with Imperator Furiosa (Charlize Theron). They’re after different things, but with warlord Immortan Joe on their tail, they have something in common. All the exposition and narrative shifts are told on the fly, and there’s really only a period of five or six minutes when characters aren’t rushing to get from one place to another.

One of the few criticisms that could be levelled at Fury Road is the fact that Max himself is a bit-player in his own film. But that didn’t bother me. It makes sense that this man, this survivor, has the ability to blend into his surroundings – that’s why he’s lasted this long. There’s also the fact that the true star of the Mad Max films has always been the world he inhabits, rather than Max himself. Theron is on fire as Furiosa, and her performance proves once again how versatile an actor she is.

Nicholas Hoult is having a whale of a time as Nux. As a crazed religious fanatic, he also manages to evoke sympathy in the viewer. His skills are put to use here in a way that never really happens in the recent X-Men films. 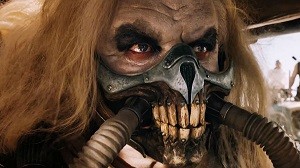 The rest of the cast are just as fun, and there are a huge amount of female roles, all distinct, all with agency. That Miller managed to create a staunchly feminist action movie only makes the experience better.

The film is filled with visual effects, however the cars chases and crashes are real. This gives the action real heft. Every time someone defends the Fast and the Furious films by saying that “it’s just a fun action movie,” point them in the direction of Fury Road. This is how you make a fun action movie.

The only complaints I have are minor ones. I had difficulty deciphering quite a bit of the dialogue, particularly during the action scenes. This didn’t hamper my enjoyment of the film, but I wonder if this was intentional or not. There were also a couple of moments where I lost track of where each character was during the big action scenes. But like I said, these are minor issues. Fury Road is a triumphant return to the series which made Miller famous, and a film that easily surpasses the previous entries.