A bit of an indie gem, Love and Time Travel is the latest entry in that sub-genre of film known as the time-travel romcom. The Infinite Man, About Time, Steins;Gate, Eternal Sunshine of the Spotless Mind and Groundhog Day have all explored this idea, but Love and Time Travel succeeds specifically on the strength of its strong dialogue and likable characters. 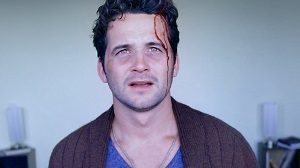 Dan (Hayden J. Weal) is a barista with very little going on in his life. When he starts receiving cryptic messages on his bedroom window, he begins to question his previously-held views on fate and causality. He’s drawn to half a dozen strangers and the web of coincidence that holds them together.

Love and Time Travel is the creation of writer/director/editor/star Hayden J. Weal, and he certainly earned his stars on this, his first feature film. The blossoming romance between Dan and Sophia (Michelle Ny) is perfectly presented, and his characters are believably flawed. Julian Dennison, from last year’s hugely successful Hunt for the Wilderpeople, also makes an appearance.

This is clearly a low-budget production. The cinematography, which is more than serviceable, is let down by the less-than-stellar picture quality. In this day and age, I assume a bad DVD transfer isn’t what’s to blame, so I can only conclude it was the quality of the production equipment at fault. It’s a pity, but for anyone who’s sat through micro-budget mind-bending fare like Coherence, this shouldn’t be a problem.

It’s the final act that lets the film down. Love and Time Travel falls for a common cliché at the last minute. The fact that the script called attention to the cliché earlier on doesn’t make it any better, unfortunately, and simply makes it feel like an excuse before the fact. That being said, the majority of this twisting, charming, and heartfelt journey is an enjoyable one.

The DVD includes an introduction by Weal, as well as video logs chronicling the creation of the film. I loved spending time with this cast of characters, and I hope to see Weal and Cleary in other productions, because these two stars show genuine talent.

A must for anyone who loves time-loop movies – I promise these people exist; I met one at a party – Love and Time Travel, or with its much more interesting title, Chronosthesia, is a great addition to this small yet fertile corner of cinema.

Love and Time Travel is available now on DVD and Blu-ray from Madman.