Love Actually is a great romcom, but that’s not all.

I confess. I am a sentimental jerk. I cry at weddings. I cry in films. I love romantic comedies. There’s not much better than a great feel-good romcom. Consequently, I really enjoyed this film. Whether it should be regarded in the upper echelon of film-making is not the question.

This is not a great film. Whilst the format, with juggling multiple storylines, is handled reasonably well, there is a certain unevenness to the story development, that leads to some of the tales seeming to be of less importance – although I’m not sure that was the intention. Certainly, toward the latter stages, the focus is on the uplifting, and the negative or sad or grotty is left behind. Maybe that was the plan, but it seemed to me that by introducing some ‘negative’ storylines, the director has an obligation to see them through, and give them the same depth as the ‘positive’ ones. The cast, however, is amazing – not since Oceans Eleven has a cast of this depth been assembled. Neeson, Firth, Thompson, Grant, Laura Linney, Martine McCutcheon, Bill Nighy, Keira Knightley, Alan Rickman – even Ant and Dec appear! The talent on display is awesome, and is predominantly well utilised, although perhaps Linney and Knightley have been short-changed. A true ensemble production.

The trick is to make us care about the characters, and given the limited time with which to hook us into each story, Curtis has done an excellent job. Even if the film moves from one story to another, I cared about the next story as well, so didn’t mind. The resolutions of each tale are well handled, and the final ‘linking’ of the disparate tales is not heavy-handed or trite. A complicated task made to feel natural.

The soundtrack deserves special mention. After watching this I downloaded several tracks, notably ‘Songbird’ by Eva Cassidy, and ‘Both Sides Now’ by Joni Mitchell. However, all the instrumental pieces fit well, and the songs with lyrics match their scenes perfectly. (The DVD has an excellent special feature documentary regarding the song choices and how they were made, including which other songs were considered and discarded for various scenes).

This is at times moving, critical and insightful, but always fun. I have enjoyed watching this multiple times, and am still affected by the relationship between Neeson and his step-son. Whilst it’s not perfect, if you enjoy feel-good or romantic comedy, there is a lot to satisfy here.

I must confess. Mark is a sentimental jerk.

Did you really cry in this film, Mark? Really? I mean, I’m as sensitive and new age as they come… BUT WHAT A GIRLY LITTLE CRY-BABY WUSS YOU MUST BE!

Don’t get me wrong, I actually really enjoyed Love Actually… um, actually. However it didn’t affect me as deeply as other romcoms have. Part of this problem is that the film goes for quantity over quality, and with so many different storylines I think it is incredibly hard to create truly deep emotional moments. By having so many different characters (and different stars) I felt that the audience was blinded to the fact that not many of the stories are as emotionally rich and touching as they should have been. 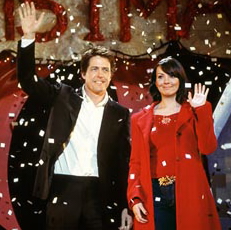 There were some great moments in this film, and the good thing about having so many characters is that if you don’t like someone, you only need wait three minutes before we’re rushed along to someone else’s story. A film like this makes you wonder exactly how many edits of the film there were. There would have been so many possible permutations that it must have taken ages to get the balance just right.

Mark was right when he says the films cheats a little bit. There are some less than happily-ever-after endings that aren’t given the attention they deserve, but this was definitely intended to be a crowd pleaser, and, after all… no one likes an unhappy ending, do they?

Of the star-spangled cast, Martine McCutcheon deserves a special mention, as I thought she was a fantastically talented and above all fresh face amongst the sea of household names. Laura Linney was also fantastic (in fact I’ve never seen her do anything badly), and it’s impressive to see that she can apply herself equally to both mainstream fluff and challenging independent films like You Can Count On Me.

There is one other thing I should mention. I read in an interview with Samantha Morton that she expressed interest in being in Love Actually and wasn’t even offered an audition. This is a terrible thing as she is an incredible performer and I’m sure would have been great. It just goes to show how the ‘mainstream blockbuster machine’ is often working to impede the creation of truly great moments in film.