A documentary focussing on Terry Gilliam’s failed The Man Who Killed Don Quixote project, this is something that has to be seen to be believed. 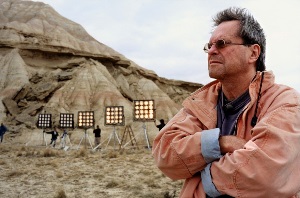 Being a budding filmmaker myself (and also pretty handy with them ol’ flower metaphors), I was glued to the screen for the hour and a half of Lost In La Mancha. There are parts of this film that are utterly heartbreaking. It is one thing to watch a Phantom Menace documentary and see what a storm can do to George Lucas, but it’s another to see how fragile the filmmaking process really is. When you think about it, it’s pretty close to a miracle each time a feature film is created. There are sooo many people involved, possibly with their own agendas, and certainly their own health, to worry about. It’s no surprise that things can go horribly, horribly wrong. (A good example would be Blade Runner. Have a read of ‘Future Noir: The Making Of Blade Runner’ by Paul M. Sammon if you dare, and see just how bad things can get. Or watch some of the documentaries on the Alien³ DVD. It’s a wonder that such films went on to receive critical acclaim (with the former, although much belated) or make money (as with Alien³).

Terry Gilliam is one of a select few filmmakers out there that have such incredibly wondrous visions (Brazil is the best example) and I’ve always claimed that he was integral in changing the image of Brad Pitt forever in 12 Monkeys. It comes as no surprise to learn, however, that very few big US studios will back his decidedly eclectic and equally ambitious ideas, and that such grand dreams cannot find financial backing outside the US.

As I said, I have a vested interest in the filmmaking process, and there were parts of this film where it seemed that some higher power had decided that the production couldn’t go on. For much of this documentary I was in shock, aghast as calamity after calamity befell the production.

I’m not sure if this film would be as entertaining to someone who isn’t interested in the filmmaking process. But, by gum! It’s a MUST SEE for any budding filmmakers out there (whether or not you are Master Of The Flower Metaphor).

Oh, and I hope his Don Quixote finally gets made, cos the footage they showed looked awesome.