The prolific Patricia Clarkson gets a starring role in this crowd-pleasing comedy drama directed by the equally prolific Isabel Coixet (My Life Without Me). 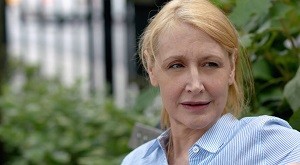 Clarkson plays Wendy, a literary critic who’s left in the lurch when her husband leaves her for another woman. Determined to turn over a new leaf, Wendy decides to finally get her driver’s licence in order to visit her daughter, Tasha (Grace Gummer.) This is where Darwan (Ben Kingsley) steps in. A Sikh with his own relationship problems, the film tracks their sometimes awkward, sometimes touching relationship.

Kingsley is incredible as Darwan, though the man is always pitch perfect, isn’t he? Yup, even in Species. He loses himself completely in the character, and his portrayal is totally unselfconscious. Clarkson is…less impressive. I’m usually a big fan of her work, but her character oscillates from pensive to madcap to easy going in a way that feels inconsistent. I don’t know whether there were scenes left on the cutting room floor that would have made Wendy’s journey more consistent, or whether she and Coixet weren’t on the same page, but it’s frustrating. In some ways, Kingsley has the easier job. His character’s journey is more restrained, whereas Clarkson’s duties run the whole gamut of emotion.

The crucial scenes in Learning to Drive are top notch, but there are some outliers that feel like they could have been from a very different film. We get a couple of daydream sequences that really don’t work, and a diversion or two with supporting characters that don’t go anywhere. When Wendy is behind the driver’s seat and Darwan’s calmly instructing her is when the film truly shines.

Grace Gummer plays Tasha, Wendy’s daughter, in a few scenes, and I would have liked to have seen more of her after really enjoying her work in HBO’s ‘The Newsroom.’ Jake Weber plays Wendy’s husband, Ted, but I was never really convinced that they could have been a couple.

Learning to Drive is a pleasant film, but one that doesn’t hit all the right beats. Whenever Kingsley’s onscreen, the film becomes a must-watch, but the bits in between can be lacklustre, whether they’re dramatic moments that feel forced or comic moments that fall flat.

Learning to Drive opens in Australia on 8 October 2015.