Here we go: the sequel to the film that no one liked…

What is it about the titles for the tomb raider movies? The first one was called Lara Croft: Tomb Raider… strange, since in video stores all around the world you just know that everyone will keep it until T instead of L. And then the second one is called Tomb Raider: Cradle Of Life. Shouldn’t there be a ‘the’ there somewhere? I’m sorry, but it bothers me…

I should mention that I actually quite liked the first film. Whilst not a great film by any stretch of the imagination, I was thoroughly entertained. Plus it had that amazing shot. (You know the one, with a fur coat clad Croft and military entourage walking in slow motion with a huge chopper lifting off in the background, all to the sound of Nine Inch Nails’ Deep. Wow.)

This film, however, is a very, very, very poor sequel. 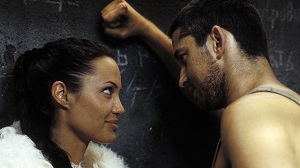 My first complaint: there isn’t enough tomb raiding in this film. In fact there is almost none. I thought the games were all about stealing artefacts from ruins? Most of this film ends up resembling a James Bond movie: people running around major cities with guns, jumping off buildings and not knowing who’s secretly working for whom. Gimme a temple, some stake pits and a golden idol and I woulda been happy.

Second complaint: no character depth. Now I wasn’t expecting much, but even an over-the-top supervillain like Treat Williams in The Phantom would have been ok. Apart from Croft herself the other characters are mere shadows of real people. They have no edge whatsoever.

I just can’t help from thinking that it would have been so easy to make this film better. So easy. There are even big things with claws! (Which I would have liked to have seen more of.) But alas they only feature for a very short time and we are given no explanation as to why they are there and why they do what they do. (Admittedly a deleted scene on the DVD does provide a short explanation.)

Oh well. At least Jolie is fantastic. And I don’t just mean just her looks. Her Lara Croft is fantastic. She might be suave and sexy most of the time, but at least she’s given the opportunity to display more human emotions and occasionally have a laugh. Similar to Halley Berry’s Jinks, she’s a James Bond who actually has fun in her job.

I quite liked TR1 as well, and apart from the shot Stuart mentions above, there was also the awesome bungy training setup fight scene – fantastic viewing of Lara flinging herself from wall to wall like a giant spider-woman and kicking some anonymous black-clad bad guy ass! Unfortunately TR2 has no such scenes, and suffers for it.

At least it opens well, with a great underwater and tomb-raiding scene. As the only real tomb-raiding section of the film, it shines, and it could have done with some company. 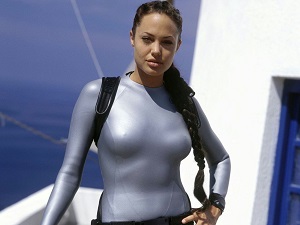 Jolie looks great as Lara (again), and the nod to the games via the scuba suit is fun. (If you’ve played them.) The creature scenes are also fun and well shot. Suspenseful and intriguing, I wish there had been more made of her solution to the problem – as it was it seemed she just snaps her fingers and figures it out – I was never that quick at solving the puzzles in the games!

The other one hundred minutes aren’t great though, and it’s here where the film falls short of its predecessor. The plot always has to have elements of the unbelievable, which I accept happily. I am glad to see a film now and then that I have to completely suspend disbelief for a while and just accept the premise and rules and enjoy the ride. However, the action and the comedy has to live up to that, and in this case it didn’t.

I liked Ciaran Hinds in Calendar Girls and Veronica Guerin, but he was strangely inadequate in this. Jolie is good, although her dramatic skills are hardly tested. The other cast have nothing of substance to play with, and are mostly forgettable. The lighting and cinematography weren’t terrible, and the creature effects were adequate. I guess I just wanted more raiding, more action, more grunt – the usual teenage boy fantasies about Lara brought to life as an ass-kicking sex addict in tight clothes! She’s not Jane Eyre for goodness sake! She’s not a figure of drama. Give her her pistols and some bad guys and let her loose!

A reasonable, but not great, film.