In a similar vein to Just Like Heaven, The Lake House is a romance concerning two people that are meant for each other but are kept only tantalisingly in reach via some supernatural phenomenon. Keanu Reeves (Constantine) and Sandra Bullock (Crash) are the unlucky lovers in question here, and they have the arduous task of rustling up some chemistry even though they share only a handful of scenes together. Of course, films like Sleepless in Seattle have achieved this in the past, but it is rather tricky to pull off. 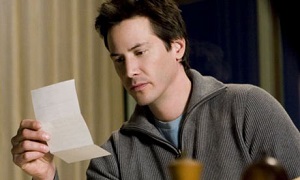 The plot makes the most of the ‘magical mailbox’ concept, indeed draining it of every single possibility. It actually shares a lot in common with the under-appreciated Frequency (and to a lesser extent the PC game ‘Day of the Tentacle’, though, alas, there are no frozen hamsters). At the centre of the film is the preposterous titular piece of architecture, which features not only all-glass walls, but also a TREE GROWING IN THE MIDDLE OF IT.

Whilst the magical aspect is well handled, the film perhaps relies on it a little too much, because the romance suffers. I’m usually a big fan of Bullock, but here it seems we only see her depressed and sulking. Reeves is a better actor than most give him credit, but only marginally. Here he is likeable but nothing special.

With most romantic comedies (though there is very little comedy here) the supporting cast are just as important as the leads. In the Lake House, they’re not much chop either, with the exception of the Ebon Moss-Bachrach. Even Christopher Plummer gives a fairly banal performance, though to be fair he has very little to work with.

The Lake House makes a few convenient leaps of logic to get the job done, but at the end of the day there’s simply no romantic spark here, not even a fizzle.