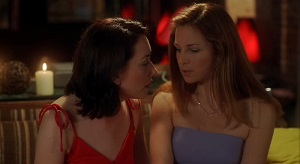 Kissing Jessica Stein was written by the two main actors, and it shows in their fantastic performances. The two women are so familiar with their dialogue, and their scenes flow incredibly smoothly. There have been accusations that the title character is in many ways a female Woody Allen, and although I can appreciate that argument, I don’t think that it is necessarily a bad thing. The supporting cast are great also, although the Jewish mother (and family) stereotyping can kinda grate after a while.

The film’s denouement also was quite a realistic approach to the situation, and although it’s likely to annoy many people, it does ring true on quite a few levels. There was only a small part of the ending that pissed me off to no end (and it loses half a point for that), but you’ll have to figure out for yourself what that is.

Kissing Jessica Stein is excellent, and came as a very pleasant surprise. What looked like being a run of the mill DVD session with Stuart ended with this gem. If only all films he forced me to endure could be this witty. 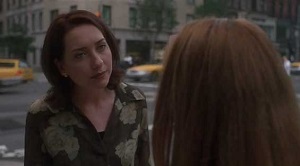 The basic plot left a little to be desired, but the absolute strength of this film is its performances – the dialogue between the two main characters sizzles! As Stuart mentioned, the actors are the authors, so they obviously know their script inside-out, but their rendition is a highlight. If only Hollywood could make more of films like this. It reminded me of the wordplay found in classic films of the ’40s and ’50s – something Cary Grant or, dare I say it, Humphrey Bogart would dine out on.

It’s not perfect though, I agree that part of the ending is frustrating. The lesser characters are not nearly as well drawn as the two principles, and at times they do seem to fall into cliche. The style is great, the music I can’t remember.

This film is a breath of fresh air – particularly if you mainly watch Hollywood mainstream. What can be achieved by two actresses with a goal, a small budget (US$1mil, for a gross of US$7mil), and a lot of effort should be a lesson to the James Camerons of the world.