With a lofty aim – to return the Arthurian legend back to something similar to its origins – this King Arthur attempts to use characters we are familiar with, but change them and turn them into something unfamiliar and different. This is one of its main strengths – I was refreshed, and enjoyed it a lot more than I expected. Whilst at times confused by the changed allegiances and definitions, it was at least interesting, and saved this from being yet another King Arthur. Sean Connery and Richard Gere?? Thank God this was a different interpretation, whether it is factually accurate and archaeologically sound or not.

There are exciting images and scenes galore, and the soundtrack is vibrant (although at times I heard traces of the Pirates of the Caribbean score, couldn’t they have chosen some new themes??). Bruckheimer is extremely good at making popcorn movies – having honed his craft with Con Air, Armageddon and Black Hawk Down, his Pirates shocked everyone by being a rollicking good show, and King Arthur will similarly be lots of fun… if you let it. His films don’t stand up to intense scrutiny, they aren’t meant to. If you allow yourself the pleasure and the escape, they will often be a helluva ride.

There are some strange choices made. Stellan Skarsgård is a super actor, and yet he was given so little play. Why not let the rivalry and drama between Arthur and his enemy build? Particularly when his enemy is being played by such a superb performer. It seemed a waste. And whilst on that note, why blow the truest scene of machismo in the trailer?? This is something Stuart always goes on about, and in this case it’s a fair criticism – the confrontation (‘parlay’ anyone? 😉 ) between Arthur and Cerdic should be a massive moment, and yet we have been spoiled by its presence in the trailer! *** WARNING – RANT BEGINNING *** Speaking of the trailer, in the scene on the frozen lake, when Lancelot comments to Guinevere that “there’s a large number of lonely men out there” and she replies “don’t worry, I won’t let them touch you”, the trailer has been overdubbed! The line in the film is different, and I can sort of see why it wasn’t included in the trailer, but grow up you stupid idiots! Is that word so awful?? Is the sight of a powerful woman commenting to a man that she won’t let them “rape” him such an affront? If you can’t bring yourselves to put it in the trailer, don’t use the scene at all. Don’t overdub another line, to protect our poor little ears from such an awful word, then include it in the cinema version – it is hypocritical and immature. *** END RANT***

Aussie Joel is passable, in a minor role, but the star is Clive Owen, who is excellent as Arthur. Ray Winstone is a favourite, and thank goodness for that! I can now remember him for something other than the horror of The War Zone. Knightley again is attractive, but at least she does something this time around, with excellent skills with bow and arrow. I agree with some of the criticism on IMDb boards about her ability to wield the weapons she is shown using, given her size, but as above, this is not meant to be so closely thought about. Just watch and enjoy how she kicks arse!

Whilst at times I was having contests with myself about which of the Knights would end up dead, (and getting it wrong), I did enjoy this quite a lot. It isn’t a brilliant film, but at least it tries something new.

I loved this film. This was no mean feat considering that I don’t think I’ve liked any other Arthurian legend films (First Knight; that silly old one with Candice Bergen going back in time; even Excalibur was disappointing with its shiny armour). 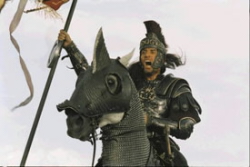 The most impressive aspect of this film is the band of knights. This is one of the most distinctive and realistic bands of warriors assembled on the screen in recent years. From the first time you see them in action, you can see how they could have inspired fear in their enemies. It’s a great collection of actors also. Clive Owen is great as the stony-faced yet tormented Arthur, Ray Winstone is awesome as Bors (I’ve never realised the extent of his acting range until now) and even Joel Edgerton is great as Gawain. Lancelot’s tale was a bit more obscure in this film, and I couldn’t tell if we were supposed to sympathise with him or not. Very little was made of the usual love triangle story, which I kinda liked cos I was never interested in that part of the legend anyway. Keira Knightly was fantastic, and beautiful as always. More impressive, however was the way in which she performed on the battlefield. I actually believed that she was capable of the acts of violence she performed, which is surprising considering she weighs about as much as a toupee. Her wild screeches and bloody teeth were especially cool as she cut down her enemies. 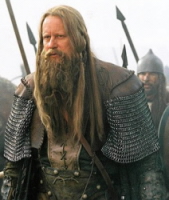 Speaking of fake hair, Stellan Skarsgård has an awesome beard in King Arthur. He is fantastic as the evil doer, and absolutely consumes his role.

The cinematography is fantastic, and smoke has never looked so cool. I thought the costuming, and in fact the whole film, struck just the right balance between reality and fantasy. There are only a couple of fantastical moments that display the Hollywood version of physics, and they for the most part work really well.

To tell you the truth I enjoyed this film more than Pirates Of The Caribbean. I realise they are very different films, but they were marketed in an almost identical fashion. While there was nothing particularly fantastic about Pirates other than Johnny Depp’s performance, here we have a great all-round film that was exciting and powerful. The film is only let down in a couple of moments at the very end (and that repeat offender known as the Voice Over is the main culprit there).