I’ve been a big fan of Takeshi Kitano’s work. Hana-Bi was fantastic and Brother was quite good also. I did, however, take my time in hiring Kikujiro, mainly because I was scared of the running time. I should mention at this juncture that I’m always scared of a film that runs over 100 minutes. Put simply, I believe that 100 minutes is a perfect length for a film. I’m pretty confident that most of my favourite films are no longer than that. This also has to do with the fact that I’ve simply seen so many films that I have very little patience with a movie that wastes my time. (What could I be doing with that wasted time, you ask? Well, watching another movie, of course!) 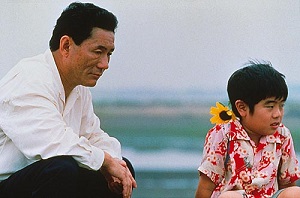 Both Hana-Bi and Brother seemed exceptionally long films, and this is mainly because of the laid-back manner in which Kitano makes his movies. But as it turned out they weren’t actually as long as they felt. Kikujiro is 121 minutes. I was scared. I was very scared.

And my fears were justified… the film is way too long. In some ways it’s like a rough draft of a script: lots of ideas before they’ve been culled down to the essentials. That being said, it is still a very good film.

It is a very charming, warm and touching film, much like Kolya, and having Takeshi opposite a child certainly means he’s able to broaden his abilities, rather than the usual deadpan, automaton-like assassin he often seems to play. Almost overly sentimental, the film also features some strikingly visualised dream sequences, something I haven’t seen in his previous films.

I think that all the three films I have seen could have been better if Takeshi hadn’t been doing all the work. He wrote, starred in, directed and edited the film, and I’m generally of the opinion that there are only a select few people who can pull this off with 100 percent success. Woody Allen used to be able to do it, and M. Night Shyamalan is usually clever enough to cut his own appearances out of his films.

Kikujiro is a great film, that could have been a fantastic film had 30 minutes been cut out.