For those who came in late, these were the salient points from my Jurassic World review of three years ago
1) it featured bizarrely sexist writing;
2) there was zero character growth; and
3) it failed to deliver a single compelling action scene, despite featuring several potentially clever ideas.
…All of which made for the worst Jurassic Park sequel yet. So I definitely wasn’t excited about the this one.

And guess what? Fallen Kingdom didn’t blow me away either… 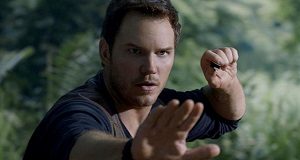 Set three years after the last film, this definitely feels more like an episode in a franchise than ever before. It starts out suspiciously similar to The Lost World: Jurassic Park. Claire (Bryce Dallas Howard) and Owen (Chris Pratt) are convinced to go back to the island, where dinos roam the wild. But from the second act onwards, it becomes a slightly different film.

I don’t want you to get the wrong idea: Fallen Kingdom doesn’t take us anywhere new. But it’s more interesting than the first act would lead you to believe. At the very least, everyone’s stopped treating Claire like shit, and there are some fun supporting characters courtesy of Daniella Pineda and Justice Smith. Unfortunately, the film plays out as if there’s no time to spare. For an 128-minute movie, it – bizarrely – achieves very little.

There are a couple of action scenes that get the job done, but like the previous film, there are also several examples of wasted potential. One in particular featuring a slowly advancing lava flow could have been a brilliant exercise in comedy and tension. Instead, it’s edited within an inch of its life, such that it’s over in 25 seconds. And that’s a mistake that’s repeated over and over with Fallen Kingdom; the film isn’t given room to breathe. This is particularly galling considering the director is J.A. Bayona, director of 2007’s The Orphanage– an incredible film that knew when to take its time.

In terms of the meta plot, it’s disappointing that the franchise is moving forward so slowly. There are a couple of moments this film seemed to tease but never delivered. I get the feeling they will crop up in the next instalment, however…

I have no idea whether audiences will love this one as they did the previous, because apparently my thoughts on what makes a good or a bad JP sequel are different to others’. Fallen Kingdom is a perfectly serviceable film. It doesn’t have the awful elements of the previous entry, but neither does it soar to new heights.

←Attack on Titan Complete Season 2 What Happened to Monday?→