Holy moley what a way to start the year. Is it too early to start compiling a top ten for 2008?

This debut script from writer Diablo Cody makes for one hell of a film. An intelligent, funny and overwhelmingly uplifting film, Juno turns a made-for-midday-TV concept into what I’m almost certain will be one of the year’s best.

Ellen Page plays Juno, the ‘unfortunate’ 16 year old that finds herself pregnant to her long time friend Bleeker (Michael Cera). Page already knocked our socks off with Hard Candy, and here she solidifies the notion that she has an awesome career ahead of her. That Juno is an outsider, detached from the rest of her school is hardly an original concept for a fictional teenager, but there’s a genuine warmth behind her jibes and sarcastic demeanour. She may ridicule the jocks, cheerleaders and the teachers at her school, but she understands and appreciates them at the same time. Michael Cera again plays the same character he did in ‘Arrested Development’ (also see Superbad), and whilst he is no doubt brilliant, he’s gonna have to break the mould sometime soon.

The supporting cast all have their time to shine. Another ‘Arre Dev’ alumni, Jason Bateman, is apparently in the process of moving from comedy to drama. The Kingdom was the first step in this transition, and here he shares the screen with Jennifer Garner again – and, wonder of wonders, Garner finally shows us that she has the right stuff. I’ve been consistently stunned by her wooden appearances in the past, from ‘Alias’ to Catch and Release, but here she finally nails a performance. The two of them play the prospective adoptive couple for Juno’s incubating offspring, and Vanessa is just that little too intent on the prospect of being a mum. Garner plays her perfectly, balancing between caring and obsessed.

Cody’s script is a thing of wonder. Too often films approach awkward subjects with trepidation, always quick to point out the error of our ways – the world sucks, people are mistreated and we’re all somehow to blame. Juno is somewhat similar to The Sum of Us, insofar as it leads by example, rather than condemning us all for our prejudices. This film makes you challenge the assumptions you (and I) make when we see teens in Juno’s predicament. Not only that, it has something to say about divorce, bullying and mothers who obsess over dogs. It has the guts to stand up for any of the people that somehow miss out on the respect of others. It only really makes fun of pro-lifers who picket abortion clinics, and even then there’s that warmth again – an almost genuine affection for them. It’s little wonder that it’s directed by Jason Reitman, the man who had the nous to get us to sympathise with a cigarette company spokesman in Thank You for Smoking.

Juno is so many colours of awesome it’s a fucking movie rainbow. Every second is pitch perfect, and it’s sharp and sweet and absolutely hilarious. Strangely enough, this film about teenagers is more mature that the vaguely similar Knocked Up, showing up Apatow’s coy, self-conscious and lazy excuse for a romantic comedy.

I’m sorry for my rather unashamed moviegasm, but it really doesn’t get any better than this.

When it comes to breakthrough performances, Ellen Page hit the jackpot with her chilling (and rather astonishing) turn as Hayley Stark in Hard Candy, but it is her lead in Juno that is likely to send her career into overdrive.

Page is Juno, a sixteen year old who has just shown positive on her third urine pregnancy test of the day, the result of a night of experimentation with her best friend Bleeker (Michael Cera). 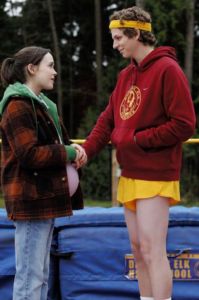 Turning first to her other best friend Leah (Olivia Thirlby) and then an abortion clinic, she eventually decides to keep the baby and offer it for adoption. As she gets to know the prospective parents (Jennifer Garner and Jason Bateman) she must face the idea that the world her baby will inhabit isn’t perfect.

Much like in Hard Candy, Juno simply wouldn’t work without the amazing skill of Page in the title role: Juno is charming, sarcastic, childish, mature beyond her years, generous and heartfelt, and without Page this combination of often conflicting qualities would be impossible to rationalise. Page is magnetic, imbuing every scene in the film with vitality, never wasting an opportunity to show another side to her character or add depth to her development. She is a truly remarkable talent, with a screen presence many times larger than her physical stature.

The supporting cast is wonderful, featuring perfectly pitched performances from Garner, Bateman, Allison Janney and J.K. Simmons, with Simmons and Janney particularly wonderful as Juno’s parents – when challenged they become defiantly protective of their daughter, and although they say their piece and convey their disappointment, neither is ever allowed to resort to stereotype. This decision makes their characters far more interesting. Garner and Bateman are perhaps slightly less fortunate, with both being given archetypal roles, although neither fails to meet the requirement. Only Michael Cera doesn’t challenge audience expectations, playing much the same character as he did on ‘Arrested Development’.

It is hard not to fall immediately in love with Reitman’s film as the rotoscoped opening credits with ‘All I Want is You’ by Barry Louis Polisar as soundtrack roll by, giving a near perfect introduction to the important lead character. Music informs the vision throughout the film in the way that soundtracks should but rarely do, and although it joins the cast in the list of Juno’s strengths, even they are surpassed by the wonderful script from first-time screenwriter Diablo Cody. From the first scene of the film through to its last, the tone is light and the script insightful, in spite of the subject matter which may have promoted a more sombre approach. The characters are fresh and interesting, and the dialogue witty and fast-paced in a way that will reward close attention.

As a film, Juno never shirks the difficulties associated with teenage pregnancy, although it may (perhaps) be guilty of slightly underplaying them – Juno herself describes the hardships but bears them with such grace she is even more admirable as a character. As an honest and mature portrayal of a young woman facing some difficult times, Juno is simply a cut above most movies about teenagers. Approaching its subject with an incredible warmth, Juno should be appreciated by all but the most hardened of hearts.