The Bourne Identity was easily one of the best action films of the last decade or so. Doug Liman, director of the indie flick Go, burst into the action movie scene with a film that not only kicked arse, but was a step ahead of its competitors as a consequence of its pretty solid grounding in reality. Alas, since then, his films have become more comic booky – and I mean this in the degrading sense of any person who makes high/low art distinctions. Mr. & Mrs. Smith was entertaining but lacked substance, and it’s the same story with Jumper. This film has two things in particular in its favour. Firstly, it stands out from other superhero movies by only including one super-power. This means that the writers were free to explore a single idea (teleportation) to the nth degree – something you’d only witness if you were a regular reader of a particular comic, and stuck with a superhero through years of issues and multiple writers. Without fail, creators of superhero sequels feel the need to escalate the action quotient, and we usually end up with messes like X Men: The Final Stand, which had scores of super-powered moments, none of which were worthwhile.

Secondly, Jumper features a superhero who obviously didn’t listen to Uncle Ben. David Rice (Hayden Christensen) doesn’t seem to realise that ‘with great power comes great responsibility’. After the origin story we see that he basically does all the stuff us mere mortals dream of when reading comics. This basically means using his power to rob banks and go globetrotting. He even teleports thirty centimetres rather than lean over to reach the remote control. This lack of moral fibre makes for an interesting narrative.

Unfortunately, once the shit starts to hit the fan, Jumper becomes more and more mundane. The budget doesn’t seem able to match the increasing magnitude of the action scenes, so that by the end the special effects are truly awful. The plot also seems to unravel, getting stuck in third gear when it really should be powering down the freeway.

Hayden Christensen has proven that he has acting chops when George Lucas isn’t present, and here he does what he can with a fairly sparse screenplay. Love interest Rachel Bilson (Millie) is unfortunately out-performed by AnnaSophia Robb of Bridge to Terabithia fame, who plays her younger incarnation. Billy Elliot himself, Jamie Bell, has the most fun, however he’s given some pretty poor punch lines. Samuel L. Jackson’s talent is wasted (a fairly common occurrence), as he’s given only a single line of (repeated) dialogue as the rationale for his rather extreme vendetta.

The film feels a lot like Liman had hoped to start another franchise, but as a consequence the resolutions are lightweight and unconvincing. Diane Lane is present, though surely only because she was promised a meatier role in any sequels.

Jumper is a good enough use of 90 minutes, but is let down by an increasingly lazy script (not to mention redundant voice over) and rushed special effects.

It seems unlikely there has ever been a more dull leading man in so many disappointing movies as in the case of Hayden Christensen – Lucas et al have a lot to answer for in foisting him upon the world in their dreadful Star Wars: Episodes II & III.

Christensen is David Rice, a young man with the world literally at his feet – ever since a teenage near-death experience he has had the ability to teleport himself almost anywhere he wants to go, with certain (rather arbitrary) limitations. He uses this special power to live the life of a playboy, supporting himself by robbing bank vaults and never really considering the consequences of his actions. 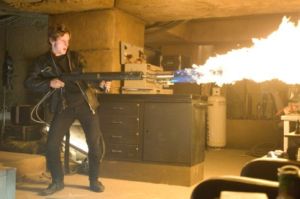 When he is noticed by the Paladins, led by Samuel L. Jackson as Roland, he is pursued to the ends of the earth and the lives of those he loves are placed in real danger.

If this precis conveys a sense of sparsity of plot and character development it has adequately done its job… Jumper is barren of ideas and abounding in wasted potential. That this is the best that could be conceived to demonstrate the possibilities of such a power is an embarrassment to those responsible. The trick soon becomes so stale as to be boring, which also fits as a description of the film itself – comparatively short at only 88 minutes it nonetheless feels far longer than it is, meaning many may be wishing that the ending (such as it is) will hasten and allow the to credits roll.

Christensen plays himself (again), bringing his trademark brooding and sullenness to yet another role – his only good performance in Shattered Glass seems a long time ago. Supporting him are Jackson and Rachel Bilson, neither of whom is given a whole lot to play with, nor succeed in making their character even remotely interesting. Roland is a character filled with possibility, and yet Jackson is allowed only to make him a religious zealot with nothing more to say than “only God should have the power”, SO HE GETS TO SAY IT TWICE! Bilson’s Millie is the kind of girl for whom you can never understand someone maintaining a lifelong passion, and yet it is hard to hold the actor responsible given the terribly inadequate character data she is afforded. It is only Jamie Bell as fellow ‘jumper’ Griffin who has any fun.

That much of the development may have been held back in the hope of making Jumper 2 – He’s still dull, but he can teleport! is no excuse – the success of Spider-Man 2 in granting Peter Parker far more depth should not provide a model for other aspiring franchises to follow. Rather, if the first film is a success, then think about numbers two and three (there’s always three, this is the age of trilogies).

While the concept offers so many wonderful possibilities, the execution is beyond tedious and bordering on comatose. Give it a miss.

←The Diving Bell and the Butterfly Definitely, Maybe→