Taika Waititi is the toast of Hollywood now, but once he was just a filmmaker from New Zealand who made wonderful (and wonderfully offbeat) films. Boy remains one of my all-time favourites, and Eagle vs Shark and Hunt for the Wilderpeople demonstrate further his capacity for wry observational comedy with a heart. Add to this resume the challenging and hilarious Jojo Rabbit, a surprise critical hit considering its topic.

Jojo (Roman Griffin Davis) is a ten-year-old boy growing up in Hitler’s Germany during the end stages of World War II. 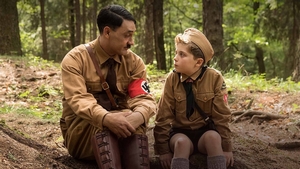 His mother Rosie (Scarlett Johansson) leaves him to his own devices to explore his hometown and spend lots of time playing with his imaginary friend Adolf (Waititi), the Führer himself. An injury incurred at a Hitler Youth training camp will mean Jojo has lots of time to recuperate and discoveries will make him question his allegiances.

Jojo Rabbit is the third major film that Waititi has helmed that features a young child in the lead role. Boy is a spectacular film that explores the loss of innocence of its lead character. Hunt for the Wilderpeople takes the audience on a bizarre adventure as a juvenile delinquent bonds with a father figure who isn’t interested in children. Waititi coaxes excellent starring performances from his young leads in both of those films.

In Jojo Rabbit, Waititi is again considering the loss of youthful naiveté through the eyes of his hero, Jojo. And, again, Waititi helps Griffin Davis to excel in a comedic lead performance that many adults would be proud to have created. Matching Griffin Davis is Thomasin McKenzie as Elsa, while both Johansson and Sam Rockwell turn in accomplished takes on their supporting roles.

The first part of this film is an absolute riot: Jojo and Adolf have a blast (pun intended) preparing and then attending the Hitler Youth camp, and Waititi’s comedic skills are on full display. This is a satire with elements of slapstick and visual comedy thrown in, and it is really, really funny.

Considering the topic and themes under exploration, however, there inevitably needs to be a change in tone. 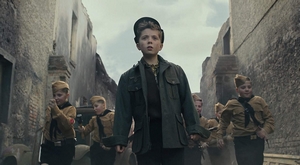 Waititi tries to graduate the shift in the mood so that it isn’t so jarring, but there is a moment when the audience is assaulted by a thematic gut punch.

It is the difficulty of balancing the two different films Waititi is trying to make that means Jojo Rabbit isn’t as successful as it threatens to be. There is only so much an audience can be willing to trust a filmmaker, and Waititi breaks that trust when the gear change occurs. As a consequence, one wonders whether we are witness to a dream sequence and the cognitive dissonance causes a departure from the filmmaker’s world back into the real.

This is all incredibly lamentable, as Jojo Rabbit has enough heart to win most audiences. The film is mostly satisfying, and it is commendable that Waititi succeeded in creating it and then having it released. Were it not for its unevenness, Jojo Rabbit would be a miracle; as it stands, it’s just a very good film with a major flaw.