Ray Lawrence’s eagerly awaited third film is a powerful drama that manages to intelligently capture Australia’s complex society without being condescending or simplistic. The film starts out something like a sequel to Wolf Creek, where again we have a ruthless killer stalking a helpless young woman in the middle of nowhere. But what follows is a complex tale of how we are all tethered to our past. Drowned but not forgotten is the original town of Jindabyne that had to make way for the Snowy Mountains scheme, and no matter how the characters try to conquer their past, it’s always there, threatening to drag them under. 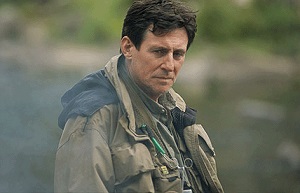 In a strange (but not unwelcome move) for Australian cinema, the cast is headed by an Irishman and an American. Laura Linney (The Exorcism of Emily Rose) is brilliant as usual, but I’m concerned it won’t be long before I tire of the ‘downtrodden wife’ roles that invariably come her way. Gabriel Byrne (Assault on Precinct 13) is good also, though his character’s motivations are frustratingly ambiguous. It’s hard to sympathise with this man who seems to have no strong ideals, be they selfless or selfish. John Howard, Simon Stone and Stelios Yiakmis complete the quartet of men who go on a fishing trip together and end up dividing not only their families but also the entire town.

The cinematography is bold, incorporating techniques that are usually avoided. We’re treated to slow zooms and fades, and once one gets comfortable with this style they truly add to the film’s more ethereal qualities. Time and again I was reminded of Picnic at Hanging Rock when watching the dead grass and huge gums sway in the breeze.

After such a build-up in the media, however, I was slightly disappointed. The central ambiguity is discouraging and there seemed to be several elements or moments that lead nowhere. The film also feels a little sluggish as it moves to the final act.

Overall Jindabyne is a powerful film that lingers once it’s over, it just failed to enthral me in quite the way I had hoped.

To non-Australian viewers, our recent screen output must be a little disconcerting, if not outright frightening. Wolf Creek, The Caterpillar Wish and now Jindabyne all describe our small country communities as rank with dark pasts and dangerous neighbours – these three alone involve a serial killer, a pedophile and another serial killer, and the ‘normal’ characters in these films are often damaged in another way. Even the abysmal A Man’s Gotta Do has its leading man a fisherman by day and standover man by night. Throw into the mix the ongoing conflict between Aboriginal and non-Aboriginal Australians, and in Jindabyne you have a town ready to explode.

This consistent focus in Australian film on the darker side of our communities must surely misrepresent life downunder, mustn’t it? Admittedly, the major centres have the problems of any large cities worldwide, but our small country towns are surely better represented by the likes of ‘SeaChange’ than Wolf Creek? Were the aforementioned non-Australian viewers planning holidays along the east coast of Australia, they may well be reconsidering…

In Jindabyne, the four men at the centre of things are everyday folk who by one (bizarre) choice end up the focus of media attention and community outrage. 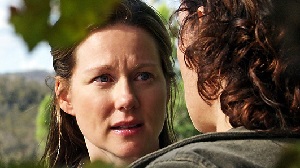 That this choice is one so strange is the singular problem in this otherwise powerful film – it is so hard to believe that anyone could make the decision they do, that any empathy for their subsequent plight is lost. This leaves the internal struggle within the viewer disappointingly simple, instead of being the challenge to our own perspective and prejudice that it may have been. Had the fateful first misstep been something we could relate to, perhaps it would be easier to place ourselves in these mens’ shoes, instead of siding so readily with their outraged families and the deeply offended Aboriginal locals.

Aside from this miscalculation, Jindabyne is an excellent piece of work. The performances are first rate, in particular those of Gabriel Byrne and the incredible Laura Linney, and Chris Haywood is suitably menacing. Deborah-Lee Furness, John Howard and Simon Stone all turn in great work in supporting roles, while the first time on screen for Sean Rees-Wemyss as Tom is a natural performance of great charm.

The countryside is shot to wonderful effect, with the Snowy Mountains and rivers spectacular to see, and much attention to the detail of water flowing or grasses swaying in the breeze helps to set the mood. Although evocative, the soundtrack in much of the early scenes is intrusive and annoying, however, and a distraction from the comparatively quiet and unspectacular bush sequences that are slowly building to the moment of truth. These would have been better served by a more passive accompaniment.

Although it has faults, Jindabyne is certainly a strong film, featuring excellent performances and an effective exploration of community and personal relationships. Complex and confronting, it is let down only by drawing its focus so heavily from a single event of dubious likelihood.

←The Book of Revelation Hoodwinked→