I was always going to see this film, no matter how much bad press it received. Chasing Amy is my third all-time favourite film, so I was a little excited about Smith attempting another romcom (rather than straight comedy). 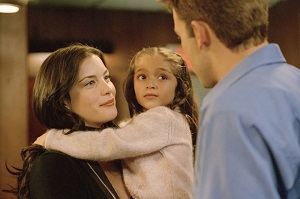 I can’t say I’m not disappointed. (Okay, so that’s a double negative… can’t you give me no slack?) Jersey Girl is a very ‘average’ film, firstly buoyed down by the whole ‘Bennifer’ saga. It’s always risky putting a Hollywood couple together onscreen, because you’re practically inviting people to compare reality with the Hollywood machine (guess what? Those two things don’t really match).

Jersey Girl is similar to Chasing Amy, however it lacks the edginess and reality that made the latter such a great film. There are very few films out there that dealt with issues of male sexuality the way that Chasing Amy did. Surprisingly candid and unashamed, it certainly resonated with myself. Unfortunately we’ve all seen the story of Jersey Girl before. I was constantly about half an hour ahead of this film, which signposted any plot developments miles before they happened. The sentimentality was also laid on way too thick right from the start.

Ben Affleck is actually in a film that allows him to act, something he hasn’t really done since Chasing Amy. Whilst I have reservations about Jersey Girl, it makes up for ‘The Sum Of All Reindeer Armageddons at Pearl Harbour’. Here at least Affleck plays a character. It might be himself, but at least he’s believable, rather than the stoic macho action man of those previous outings.

Once again it’s refreshing to see someone from The Lord Of The Rings in a more pedestrian outing. Liv Tyler certainly isn’t challenged in Jersey Girl, but eminently watchable. Lopez is okay, but I never really enjoy her performances – she never seems to have much in the way of screen presence.

This isn’t a great movie by any means, but I feel like giving Smith an encouragement award for having a go at it.