It’s rare to see a sequel that’s better than the original. (I know, a lot of you are jumping up and down, yelling out The Godfather Part II! Aliens! The Empire Strikes Back! And all the rest of the films that are mentioned in the sequels discussion of Scream 2.) I’m not sure if Jeepers Creepers 2 is definitely better than the original, but if not it’s easily an equal sequel. 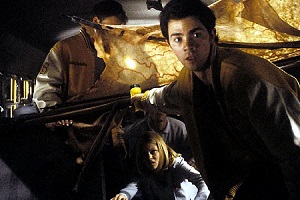 JC 2 is first of all a superior film in terms of cinematography, script, editing, acting and stunts. Presumably Victor Salva had a much larger budget to work with, and it certainly shows. What’s particularly good with this sequel is that he hasn’t gone overboard. It’s still a film with a very narrow focus, and it doesn’t go out of its way to break many of the rules set up in Jeepers Creepers, a mistake made on many sequels (for example Hypercube: Cube 2). On the flipside, this means that there are a lot fewer surprises in JC 2 than in other sequels.

The acting is so-so. Nothing bad, nothing particularly good either. After viewing the deleted scenes, I’m thankful that most of them were cut out. There was certainly some dodgy dialogue that didn’t make it to the final cut.

Once again we have been subjected to a horror film that spends a lot of time in a cornfield. What is it with Americans and cornfields? They seem like pretty innocuous places to me… but oh no! There’s all sorts of nasties waiting out there, hidden between the stems, from Children Of The Corn to Roadkill (Joyride) to Signs. I find myself wondering if the Corn Growers Of America boycott such films that give their properties such a bad reputation.

Maybe we could do the same here in Australia with, say… wineries…

Full moon. Jimmy walks along the vine rows at the Conungatta Winery, looking left and right. Old Man Frank walks along the row next to him. An eerie mist plays amongst the leaves.
Medium shot of Jimmy as he notices something strange. He steps forward to have a closer look.

Jimmy: Frank! There’s something wrong with the vines. The grapes look… weird.

Assorted screams and ripping sounds as Jimmy is dismembered.

If you liked JC 1 (and I’m sure there are a few of you, some who harbour a love of for that trashy yet enjoyable movie, secretly putting up the poster on the inside of your cupboard), you’ll definitely like this one. Right now I’m thinking that I don’t want to see this film again, though… I loved it the other day, but now I’m worried that a second viewing might reveal it to be a boring, silly piece of anti-cornfield propaganda.