I have to admit this is my first venture into the Jackass world. I haven’t seen the first film or even more than five minutes of the TV series, so maybe I’m not the best judge of this latest bunch of disgusting, painful and horrifying stunts. It is truly incredible to watch this pack of loonies do their thing. Whether being charged by bulls, sliding down snow-packed staircases or swimming as bait for sharks (complete with a fishhook through the cheek) you know they’re gonna bring the pain and have you laughing and cringing at the same time. 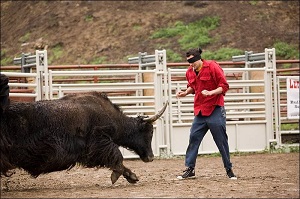 It’s clear watching Jackass that this 95 minutes was cut from a hell of a lot of footage – some highly elaborate setups only run for a minute or two, but the impressive thing is that they seem to have ordered them perfectly. The climactic stunt featuring Jay Chandrasekhar runs for close to fifteen minutes, and is truly brilliant. Whilst this centrepiece does feature some gross-out humour, the actual plan is intelligently conceived, and easily the best thing they’ve ever done. There’s a fair share of guest stars from Mike Judge to Luke Wilson to Spike Jonze, and Bam Margera’s parents are in attendance too (horrified but obviously not too horrified).

Jackass is such a brilliant concept because it doesn’t require a whole lot of cash to produce (ignoring the fact they somehow spent US$11.5 million), and there are so many in the Jackass troupe that only a fraction of them need to be available for each skit. Since all the boys have splinter endeavours, it’s the perfect project. Sometimes, believe it or not, it seems that maybe the fellas are over-exaggerating their injuries (surely they’d build up a resistance after a while of Jackassing?), but then again seeing them cower and mumble in agony is part of the whole point, isn’t it?

This isn’t a ‘movie’ in the traditional sense of the word, and the film will lose nothing on the small screen, despite the cinematic top and tail. Unashamedly crass, shameful and immature, it’s positively hilarious.