When one door closes, another opens. That’s what we should tell ourselves in the wake of the shocking reviews for The Dark Tower. The door that opened? Well, that would be the remake of It, which has clearly been made by people who love the source material (unlike The Dark Tower, by all accounts.)

It seems pretty clear that the success of 80s nostalgia with the likes of Super 8 and ‘Stranger Things’ means that it was finally time to revisit one of King’s most loved books. Whereas the book was set in the 80s with flashbacks to the 50s, this film has updated the timeline for all those people who grew up reading the book. So instead of being nostalgic about the 50s, we get to be nostalgic about the 80s. There’s a certain symmetry to this concept that’s rather pleasing.

For those who do 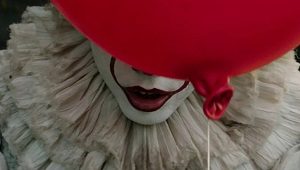 n’t know, the story concerns the Losers’ Club – a group of children who don’t fit in at in their town of Derry, Maine, and who form a friendship borne out of isolation. There’s something wrong with the town, however. (Something wrong in Derry? Whoda thunk it?!) Kids have a habit of going missing, and there’s a creepy clown at the centre of it all.

The 1990 miniseries is remembered mainly for Tim Curry’s performance, less so for the climax. This version of It neatly fixes some of the issues by separating the two timeframes, and only focussing on the kids for this feature, subtitled Chapter One. I do wonder how Chapter Two is going to manage. A crucial part of the novel is the fact that none of the grown-up Losers remember what happened back when they were kids. Is the audience going to spend most of the sequel waiting for the adults to remember?

Bill Skarsgård plays Pennywise here, and he’s phenomenal. I should make it clear that none of this film was scary – monsters and gore don’t have much of an effect on me – but I spent most of Pennywise’s screentime marvelling at Skarsgård’s physical performance. He is fascinating to watch, and was consistently the most exciting part of the film.

The kids are all good too. Finn Wolfhard is fresh off ‘Stranger Things’, but the entire group impresses. Chase Palmer, Cary Fukunaga (who was previously tipped to direct the film) and Gary Dauberman have done an incredible job distilling the doorstop-novel into a workable 135-minute screenplay. They spend the most amount of time with Beverley’s character, which I think was a smart move. If you weren’t going to mix up the representation in the group, then you at least give the only girl as much screentime as possible. Sophia Lillis is more than up to the task, too.

The movie hits the ground running. It’s a well-made film, but I couldn’t say that it was truly dynamic. There’s a lot of screaming and nightmarish imagery, and the story never slows down enough to really become creepy. There are a tonne of visual effects, most of which are excellent.

At the end of the day, It feels rushed, even if they’re saving 50% of the book for the sequel. It doesn’t deal in subtlety, but there’s something old-fashioned about its kitchen-sink approach to storytelling. Here’s hoping part 2 can impress also.

←47 Meters Down Love and Time Travel→