Okay, yeah… so this film is a little shocking. I knew quite a bit about it before seeing Irréversible (who hasn’t heard about THAT scene) but there was actually one or two other things that I wasn’t suspecting that shocked me. This is impressive, since I’m not usually particularly squeamish or easily traumatized by films. 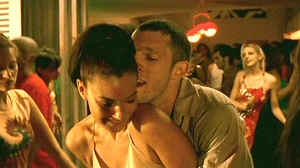 The good news is that there is an actual point to Irréversible: it isn’t just mindless sex and violence. It takes a while to make itself known, but there is a very solid concept behind these events. Whilst events occur in reverse order, there’s no mystery here, as with its counterpart Memento.

More importantly, however, Irréversible is an outstanding technical achievement. I have never seen a film shot like this. The cinematography is astounding – not just long takes but lots of hidden edits and a camera that seems to swivel in every conceivable direction. This is particularly effective to get across that we are essentially travelling backwards in time. The lighting is also stunning – this film looks incredible. The special effects (both physical and digital) are great also, one particular exercise in prosthetics being truly awe-inspiring.

The acting is of a high standard across the board. This is the third film I have seen Bellucci and Cassel together in (The Apartment (L’ Appartement), Brotherhood Of The Wolf (Le Pacte des loups) – maybe there are more?), and both are very believable, multi-dimensional characters. Cassel, as per usual, plays a dickhead. (Honestly, I’ve so rarely seen him play a ‘nice guy’).

Irréversible is not for the squeamish, but it is an intellectual cinema experience that takes us to places I don’t remember ever having gone before. That being said, I probably won’t see it again. It’s not the most enjoyable film.