Since Tony Stark made the surprising decision to go public as Iron Man at the end of the first film, the world has become a better place as no one’s willing to go against his unstoppable creation (though we all know this won’t last). The US Government isn’t too happy with so much power being the hands of a single citizen, so is doing its best to force Stark to hand over his creation, something which he refuses to do.

It’s an interesting predicament and this particular problem is one that seems quite realistic. This – however shallow – exploration of peace through superior firepower is an interesting concept and easily tops the less than impressive half-hearted stance taken by the first film – that weapons manufacturers are only evil if they make weapons for the ‘bad guys’.

The second most important aspect of Iron Man 2 is that it dedicates more time to the Tony Stark/Pepper Potts relationship. This was one of the strengths of the first outing, and thankfully a lot more screen time is devoted to it here. Favreau has also managed a rare feat – creating strong independent female characters in a comic book movie (something The Dark Knight failed at completely). Paltrow’s performance as Potts is fantastic, and excepting a couple of moments which I shall get to later, she balances out Stark’s self-destructive tendencies. Scarlett Johansson joins the fold as Natalie Rushman, another wonderfully strong female character that completely mystifies Stark simply because she betrays no emotion whatsoever, something that – quite frankly – terrifies the playboy in him.

The replacement of Terrence Howard with Don Cheadle doesn’t really achieve much – Lt. Colonel James Rhodes’ stance isn’t really fleshed out enough to justify the creation of War Machine and Mickey Rourke is at a loss to bring any credibility to Ivan Vanko. It’s very rare that a superhero movie gets the balance between character motivation and plot right. Here, the personal relationships are handled with skill however the arch villain plot is barely realised. The biggest threat to the modern world is in fact Iron Man himself, though the film isn’t willing to plunder that concept to the fullest.

The action sequences are much better than the first film, generally, and the special effects are so-so. They simply can’t work out how to show Iron Man without the mask on – we either have Downey Jr.’s head stuck on top like a bad Photoshop cut and paste, or we have him dancing around in a plastic suit looking a lot like a Power Ranger. Here’s hoping that Ryan Reynolds looks OK in the CGI suit we’re going to be seeing in Green Lantern. After such a reliance on CGI in comic book movies, it’s significant that the best action scene in Iron Man 2 is one that focuses on real people and a lot of wirework.

Iron Man 2 is great fun, and much better than its predecessor. The writing really does the characters justice up until the last few minutes, which make me worry that the third film is going to be awful. For the most part, however, this gets two thumbs up, and is another well-placed step in Marvel’s ever-so-slightly-terrifying Avengers plan.

Contrary to the opinion of my esteemed colleague, it is unfortunately my duty to report that Iron Man 2 fails to live up to the promise made by (the somewhat misguided) Iron Man, and becomes close to tedious at points thanks mainly to the absence of the charm Robert Downey Jr. brought to bear first time around.

When Tony Stark announced to the world at the end of the first film that he was indeed Iron Man, both friends and enemies were watching. Ivan Vanko sees the press conference from his slovel in Russia, and – aided by the plans his physicist father made with Howard Stark before he was expelled from the USA – goes about making himself into a new and improved weapon based on Stark’s arc reactor. 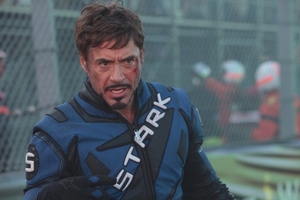 Meanwhile, a Senate committee is determined to get their hands on Stark’s suit, leaving Colonel James Rhodes (Don Cheadle) with a difficult choice to make.

To say that Iron Man 2 is long-winded and disappointing isn’t to do true justice to its problems. Several sections are frankly dull, while others depend on an attempt to allow Stark the same kind of character depth and developmental arc that lucky characters in the better comic-book adaptations have enjoyed. Bruce Wayne in Batman Begins and Peter Parker in Spider-Man 2 are the best exemplars, and the writers seem intent on giving Stark an emotional journey to take in Iron Man 2, but sadly they fail. The unfortunate side-effect of their failure is to strip away most of the charm and energy of the character that Downey Jr. was able to harness so effectively in the first film.

Supporting characters are marginally better off this film, with Pepper Potts given much more screen time – although how it is used still disappoints – while Rhodes seems more accessible in this film. It isn’t clear that the change in actor (Cheadle replaces Terrence Howard) has made much difference, but certainly the difficult tension Rhodes experiences between friendship and duty is effective. Samuel L. Jackson appears in a slightly larger role in this film, and Scarlett Johansson is introduced to good effect, although she isn’t asked to do much more than look good in tight clothes.

That Iron Man is the flag-bearer for the series of Marvel adaptations is clear, and the interactions between the superheroes and their worlds becomes stronger with each outing. Observant viewers will notice Captain America’s shield repurposed by Stark, while a post-credit sequence points to another film soon to come. Fans of the comics may love these little touches, although there is a danger of marketing too heavily while cross-promoting.

There is nothing wrong with aiming high and failing, but that is probably the best that can be said of Iron Man 2. Fans may enjoy it, but the charm and wit of the first film have been sacrificed at the altar of character development. Wait for dvd.

←Men in the City When in Rome→