The Coen brothers have lost it. It’s such a pity.

I thought The Big Lebowski was a fantastic film, and that Fargo was a near-masterpiece. But unfortunately it seems that the ‘brothers’ haven’t moved with the times. Where the oddball characters of those films were funny and clever, those in Intolerable Cruelty just seem annoying. 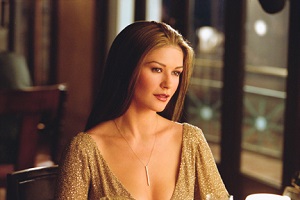 Now I hated the first scene of this film. Absolutely hated. The over-the-top behaviour grated horribly, and I didn’t find it funny in the least. The actors all did their best, but it just seems that the Coen brothers need to take a different approach to their characterisations. And Geoffrey Rush… I don’t think I’ve liked much of his post-Shine work at all. In fact the only films I’ve liked him in since are probably Elizabeth and The Banger Sisters. I thought he was annoyingly OTT in Pirates Of The Caribbean, and the less said about The House On Haunted Hill, the better.

I do admire George Clooney for his cinematic choices in recent years. From what I have heard he is only going for the slightly more challenging, highbrow stuff, like Out Of Sight, Solaris, and O Brother, Where Art Thou? (although I have to point out that I didn’t like Out Of Sight or Oh Brother, and I haven’t seen Solaris), and he does handle himself admirably in this film.

The Coens still have their trademark strong female character, which is admirable. This is a tradition they began in Blood Simple and had honed to a fine art with Fargo (and Francis McDormand’s Academy Award was well-deserved).

I was bored throughout most of this film. In fact I often spent whole minutes not looking at the screen but just listening, occupying myself with cleaning my room. The best thing this film had going for it was the opening credit sequence. Oh, and Cedric The Entertainer was fantastic.

Now as far as I know the Coen’s next feature is The Ladykillers, a remake of the Ealing masterpiece. There’s no way I’m going to like that. I’ve hated their last two films, and now they’re remaking a film that doesn’t need to be remade…perfect.