The Interpreter tries hard to be a top-notch drama/thriller, but is let down by poor editing and inadequate direction. I don’t like Nicole Kidman’s work very much. There… I’ve admitted it. I can’t recall seeing a film I’ve liked her in, which tends to put me off watching more of her work. Disappointing as this is, (her being Australia’s pride and joy and all, even though Cate Blanchett is vastly superior in my opinion), I still had hopes for The Interpreter. The trailer sets the scene of a tense drama, with twists and turns, and the presence of Catherine Keener and Sean Penn also lends it some credibility.

Unfortunately, The Interpreter seems to have been rudder-less. Ambling its way along for 128 minutes, about 30 of which could/should have been cut without substantive damage to the plot or character development, it just never seems to get where it wants to go. Sure, Penn and Kidman are both reasonable, but there is such a lack of intensity and drive, the whole film suffers for it.

My views may also have been coloured by the appalling behaviour of one young person who brought their infant child along to my opening night evening session, and proceeded to allow it to cry, grunt, moan, giggle and make various other distracting and important-moment-ruining noises. I think I would have failed to enjoy this film irrespective, but it is the basic lack of respect for other patrons that I find so hard to tolerate.

Kidman, on the other hand, is tolerable, but displays an accent that wanders from Bondi beach to South Africa, stopping off in New York and London for drinks along the way. A good friend has informed me that she read an interview with Aussie Nic, in which she describes her voice coach trying to find a ‘whole world’ accent, with a mish mash of everything and anything thrown in. That is fine in principle, but in practice it was just distracting. Penn plays the injured hero like he’s done it before… wait, he has, hasn’t he? He and Kidman provide some amusement with their ‘two wounded people finding healing within each other’ routine, but I may have found it more touching were it not so bleeding obvious.

In the end, The Interpreter fails to achieve much of what it sets out to do. It is a reasonable film, but the negatives of its excessive length and poor direction hamper what could have been much more fun.

The Interpreter didn’t hit the mark for me either (ahem, so to speak), but I did enjoy it more than my learned friend. Sydney Pollack’s film is sluggish at times, even if there are a couple of decent suspense sequences. 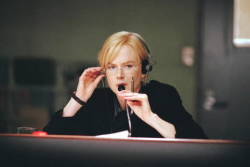 Kidman does a great job, and I’ve only ever really been disappointed with her work in Moulin Rouge. And I disagree with Mark, I thought her accent worked really well. My only complaint concerning Kidman is that only a quarter of her was there – she is so incredibly thin in this movie! At times I was on the edge of my seat purely because I was worried she’d snap in the wind. Sean Penn – well, if you’ve read any of my other reviews (like Mystic River) you’ll know that I’m not the biggest fan of his work. In The Interpreter he delivers exactly the same performance he always does: understated, grumpy and above all boring. Catherine Keener on the other hand was great, and it was a nice change to see her not playing a bitch, (Being John Malkovich springs to mind).

As I said, there are a couple of great moments in The Interpreter, but there are other times where the film is sluggish and heavy-handed. The use of the actual UN buildings aside, there were times when the film went into fantasy territory, with some very unlikely moments. Exactly how easy is it to smuggle weapons into that building? And would Penn’s character really be allowed back to work in such an important and high risk job so soon after such loss?

At first the uncertainty surrounding Kidman’s Sylvia gave Pollack’s film an edge, and I really hoped that this would be maintained, but soon we wander into standard thriller territory. It would have all been okay had the climax been something special. Unfortunately it’s rather predictable, even if the moral is a sound one.

The Interpreter could have been a brilliant film, but instead it’s merely a decent thriller. A shorter, more understated film would have been more enjoyable.