When The Matrix first came out, I didn’t really dig it. I found it to be overlong and a little too confused as to what type of film it wanted to be. Nevertheless, it seemed to blow a lot of people’s minds, and it was considered stunningly original outside of sci-fi geek circles.

Inception is my Matrix. This film blew my mind. It’s not even that it’s original – the concepts have been done before – but it takes an idea and then multiplies it. Several times. To stunning effect. 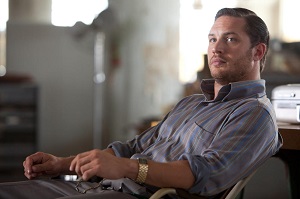 This is an incredible movie. It’s so good that I’m not going to mention anything about the plot – I came to this movie blank after a complete self-imposed media ban and I think I’m better off for it. Nolan has crafted a film as meticulous as The Prestige, but without the disappointing twists that let that film down. This heist flick is a puzzle box of dreams brought to the screen with an urgency and vibrancy that is truly wondrous. As with his last four films, Nolan has filled the screen time with a sense of urgency, so much so that I didn’t even realise I had just sat through a two and a half hour movie.

Practically the only problem I had with Inception was that DiCaprio was a bit dull. In recent years, it has only been his turn in The Departed that really impressed, and yet it was Blood Diamond for which he got all the kudos. Here he plays a character uncomfortably similar to his from Shutter Island, and unfortunately he has persisted with trying to grow facial hair like a grown up. Take it from me, Leo: It. Doesn’t. Work.

In a strange way, this casting decision reminds me of M. Night Shyamalan. When doing publicity rounds for Signs, he was asked why he choose Mel Gibson for the lead role. Shyamalan’s response was along the lines of “I can’t cast Bruce Willis in all my films”. It feels like a similar story here – Christian Bale would have been better suited to the role, however we’ve seen him enough already in Nolan’s work.

Fortunately, DiCaprio is surrounded by a fantastic cast, not the least of which is Ellen Page. As Ariadne, she effectively steps in for the audience, being a newcomer to the outlandish concepts that Cobb (DiCaprio) and the others are so comfortable with. At the same time, however, she has a tenacity and brilliance that makes her more than just a wide-eyed innocent. In fact, coupled with Marion Cotillard’s performance as Mal (I’ve never seen this woman so terrifying), this would have to be the first Nolan-directed film in years that’s featured some strong female characters. As brilliant as the Batman movies were, that was one department in which they failed.

Joseph Gordon-Levitt makes up for the sin of appearing in G.I. Joe: The Rise of Cobra by being a kick-arse action star who isn’t the least bit flashy, whilst Tom Hardy regularly steals the show as the smart aleck Eames. Cillian Murphy has the unenviable task of being both the target of the sting yet also soliciting our sympathy, something which he does with extraordinary skill.

Inception is thrilling from beginning to end. The ease with which Nolan manages to navigate us through quite a mindfuck is remarkable. There is a lot of exposition going on, but its delivered with such urgency that it doesn’t feel patronising.

The special effects are wonderful, and the art design extraordinary. This film has fun with reappropriating the metropolises we regularly move about in, and Inception has the best skyscraper-related special effects since Dark City. On a side note, it’s depressing that make-up effects gurus still can’t get aging makeup to work. I don’t remember it ever being successful, and when requiring an older version of a character, simply hiring an older actor should always be preferable.

Hans Zimmer’s score is excellent. Even so, it’s easy to see that Nolan seems to ask of him the same thing for every job – the music is clearly in the same vein as the Batman films – bombastic without having any distracting themes. It’ll certainly be on my soundtrack to-buy list.

Admittedly, this film probably wouldn’t have been given the green light if The Matrix hadn’t been such a success, even in the wake of the stupendously successful The Dark Knight. But Inception is a much better film than the Wachowskis delivered. This easily sits alongside Batman Begins as my equal-favourite Nolan film.

So here’s the thing: when I walked out of the cinema after seeing Inception, I felt I had just witnessed something special. The film had been a technical feat, and I was thrilled by director Christopher Nolan’s skill; however, I knew I hadn’t been moved or excited by what I had seen. The hollow feeling of realisation that developed over the next twelve hours or so is hard to define, but I suspect it reflects my gradual realisation of Nolan’s great con: in the spirit of The Prestige, I had been witness to a brilliantly executed magic trick that almost convinced me of the merits of the film, but collapsed upon consideration like a house of cards.

There is no question that Inception is an extraordinary film. As an original work released in blockbuster season, it is the flagbearer for those of us who wish we could occasionally benefit from more bravery on the part of the Hollywood money-men. 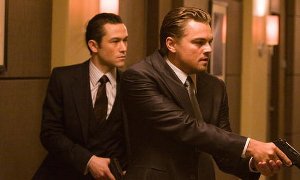 Further, Nolan manages to add layer upon layer, taking the concept of parallel and interwoven storylines to new levels of insanity, and yet the film remains clear and understandable on the first viewing. (The mad rush to get infographics online that explain the various ‘levels’ within the narrative is a little unnecessary, as the film should be understood by anyone paying attention.) While it remains a wonderful exercise in film mechanics, however, it lacks that which keeps audiences coming back for more: heart.

Who are these people we spend two and a half hours among? The audience is never given more than a shred of information about most of the main characters, with Leonardo DiCaprio’s Cobb the only one we can even start to hope to understand. Even then, given the concepts explored in the film, we can never be sure that the information we believe we know about Cobb is true or real, which introduces such uncertainty as to make him far harder to relate to than would otherwise be the case.

His buddies are cyphers, placeholders for characters that someone forgot to embellish later. Ellen Page strives to make the most of her opportunities as Ariadne, but cannot overcome the failure of Nolan to elaborate on who she is or why she’s there. Joseph Gordon-Levitt (Arthur) and Tom Hardy (Eames) are even less fortunate. Perhaps Nolan and his cohort felt that getting his characters to spout exposition for the first two hours of the film would suffice as character development as well but, sadly, it doesn’t.

Two hours of exposition is not an exaggeration, and it is really only in the final act that the film is able to shed its inhibitions and get its groove going. The sequences in which the characters are awaiting the impending ‘kicks’ (if you haven’t seen it, I won’t be elaborating given our concern about spoiling the effect, sorry) are rather wonderful. It’s just a shame that it takes so much explanation to get there.

Special effects, soundtrack and cinematography are all first rate, although there are the now-obligatory scenes shot with handheld cameras that jar. This blight on modern filmmaking afflicted Nolan’s Batman Begins as well, although he is much more restrained here and the film is better for it. Seeing the street literally fold in half is almost worth the price of admission, however, and Nolan and his crew seem to have had a lot of fun designing each dreamscape.

By choosing to end his film as he does, Nolan betrays his audience for a cheap ‘thrill’ that is entirely unnecessary. The meaning for Cobb is clear, and yet I was left feeling disappointed that Nolan appears to have so little respect for his viewers. Others may choose to debate this, but for a film that seems to be shooting for high concept originality, the final shot really is low-rent.

None of these criticisms are meant to deny the fact that Inception is a masterclass in building and maintaining narrative despite multiple timelines and settings, however there are many reasons why it isn’t the masterpiece some claim it to be. Nolan has won many fans over recent years, with Memento, Batman Begins, The Prestige (admittedly, to a lesser extent), The Dark Knight and now Inception thrilling audiences worldwide, although it seems a shame his latest probably doesn’t truly belong in such company.