First of all this is one of the most beautiful films I’ve ever seen. Every shot is a masterpiece. They could print stills and hang them in a gallery. Seriously. It’s that good. Cinematographer Dion Beebe seems to have favoured a very shallow focus, something that I have never seen used so prominently in any film, ever. And when I say shallow focus, I mean shallow. There are close ups in which the person’s nose will be in focus but their face isn’t. Sounds bad, I know… but it’s not. 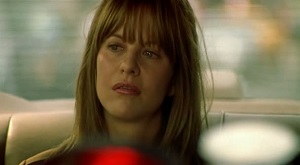 I can’t really be bothered making much of Meg Ryan’s performance. This is certainly a startling diversion from her usual work, but it wasn’t groundbreaking in any other sense. In fact it’s the supporting characters that really get to shine in this film. Mark Ruffalo is quite disturbingly repulsive as the seedy detective (and almost unrecognisable from his turn in Eternal Sunshine Of The Spotless Mind), Jennifer Jason Leigh is great as a well meaning but f*cked up sister, and Kevin Bacon is fantastic in a much smaller role than usual.

Whilst Jane Campion has a tradition of making films about women in a men’s world, I felt this film failed to be a hard hitting feminist discourse, mainly because the story was so ordinary. There have been a thousand thrillers that have told the same story in the past.

In a nutshell, this is a typical psychological thriller masquerading as something more. Maybe if you approach it without any high and mighty expectations then you might enjoy it more than I did.