In My Father’s Den is an extraordinary film, confirming New Zealand’s superiority in filmmaking, and leaving me gasping for air…

Truly, this is such a wonderfully made film, it puts so many of its big-budget contemporaries to shame, whilst pointing us to lots of new talent. Barclay and MacFayden are absolutely superb, and McGann may well be the next Phillip Noyce. This story of the return of the not-so-prodigal son to his home town, after more than 15 years away, and the revelations and revolutions that occur, is beautifully told. McGann flirts with being a bit long-winded in the first half, with exposition upon exposition, but gets away with it mainly because his cast make us want to know these things about them, whether they directly impact the story or not. I wanted to know about Celia’s school life, and how she feels about her peers’ behaviour at parties. I wanted to wallow in the utter bleakness that life in this small town New Zealand is shown to be. Perhaps he could have got on with it a bit, but I didn’t mind at all.

The later developments and the final denouement are shocking, although Celia’s final escape from her teenage life in this place seems almost a blessing. The exploration of the effects that occur from one betrayal are well-directed and impressively conveyed. The unravelling of the webs keeps us hooked – there was nary a cough or sniff in my viewing, the almost full house being completely respectful.

The technique of layered flashbacks will not feel comfortable for those easily distracted, so don’t see this if you have trouble following complicated plots. That being said, I found it extremely clear, and the flashbacks really added weight to my appreciation of the events occurring. The use of voiceover by Celia during flashbacks was a useful explanatory device.

This is an extremely intelligent film, which effectively explores memory of the past, and the impact the past has on our present. Powerful and moving, it is highly recommended. The hoopla factor is not as high as it could be, as this film deals at times in not very enjoyable fare – perhaps you have to be in the right mood. If you’re looking for something to challenge and move you, however, In My Father’s Den is superb.

I concur most wholeheartedly, my learned friend… In My Father’s Den is a fantastic film. 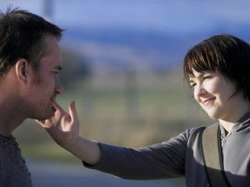 What impressed me the most with this film was its ability to focus on so many characters with such depth. Although a small amount of time was spent with the supporting cast, we still got a strong sense of who they were, what they were doing and how they felt about everyone else.

This is a very beautiful film, but more importantly the cinematographer isn’t screaming for attention like the recent Somersault.

I get the feeling that I wouldn’t have given a second thought to the story had I simply read the book. The basic premise isn’t really much more than a pulp mystery (it reminded me a little of the woeful The Monkey’s Mask), yet the story is masterfully told. Here we have stunningly realised characters, exceptional performances and a film that never tries too hard to impress.

Actually, who am I to criticise a book I haven’t read? I take the above derogatory comments back. I was simply surprised to learn that In My Father’s Den was indeed based on a book, as it seemed to be a quintessentially cinematic experience.

The slightly non-linear plot progression works well, particularly in the second half of the film. Never confusing, this time travelling works brilliantly to highlight the fact that feelings are intrinsically linked with memory, and that the past gives strength and validity to the present.

I didn’t love this film as much as I recognised it for its brilliance. In some ways this is the opposite of Garden State, which I saw only a week ago.

←Bridget Jones: The Edge of Reason The Hitchhiker's Guide to the Galaxy→

In My Father’s Den