In Good Company is surprisingly good; a quiet, understated and yet moving story of two men and how they can learn from each other.

When ‘Sports America’, the magazine Dan Foreman (Dennis Quaid) is the chief advertising salesman for, is bought out by a large corporation, he is demoted, replaced by upstart Carter Duryea (Topher Grace). With the inevitable clash of cultures that occurs between the older generation and the new, In Good Company also introduces Foreman’s daughter, Scarlett Johansson’s Alex, as the new love interest for her father’s new boss. Obvious complications from this arrangement set in, and conflict ensues. Sure, it sounds formulaic, but the skill with which it is made, and the excellent performances, allow it to rise above that, and become a very enjoyable drama/comedy. Paul Weitz uses a particular technique to great effect throughout this film – by showing his two men’s stories as opposing and interchanging, and contrasting their fortunes and frustrations, but constantly showing both together, as two parts of the same, he allows us to see both men’s flaws and strengths. We see one’s highlights mirrored by the other’s lows, and one’s family life by the other’s solitude. The constant changing from one story to the other, and the interleaving that occurs, is a real positive. I found this technique very effective indeed.

Another strength is the quiet, laidback manner used to tell this story. We move at a languid pace, with understatement instead of bravado. I believe Stuart found it dragged a little, but for me the rate of unravelling was just right. We are allowed time to see the effects of the takeover, both on peripheral characters (and thus indirectly on the main protagonists), as well as directly on our duelling men. We can digest each development, without needing to rapidly put it to the back of the mind as another occurs. In this film, this style really works.

This would not be possible were it not for the performances of Quaid and Grace – Quaid gives his usual flawed hero, and Grace is a real highlight as the marketing executive who knows nothing about real life. Both are excellent, and they have a rapport I found enhanced their developing onscreen relationship.

In Good Company also effectively deals with some of the issues surrounding corporatisation, and the lack of a corporate ethic. With ‘downsizing’ and ‘bottom line’ being the only important phrases, instead of loyalty, dedication and service, the Globecom takeover amounts to a clean out of the staff that built the magazine, and their replacement with corporate yes-men who don’t understand their market. Showing multiple examples of this, Weitz effectively tells us his opinion, that the ‘real’ people who know their product, and care about their colleagues and customers, are the true heroes, not those who drive flash cars, and only know jargon and catchphrases.

The soundtrack is very enjoyable, although I liked that of Weitz’s previous About a Boy a lot more – it was one of the highlights of 2002. In this case, the use of Damien Rice’s ‘Cannonball’ from last year’s hit album ‘O’ was a standout, although Diana Krall’s version of ‘Besame Mucho’ also struck home.

There are some flaws to In Good Company. Some of the developments were a little obvious, and the final denouement was not unexpected. There are several moments when Quaid slightly misses the mark. And Scarlett Johansson’s lips are just too big. Other than those minor complaints, I enjoyed this very much, and would heartily recommend it.

Weitz’s new film had a lot to live up to. Both American Pie and About A Boy were great (albeit very different) films. They both hit the mark with their respective audiences and will both be remembered; the latter for showing us that Hugh Grant hasn’t gone completely stale, and the former for showing us alternate applications of desserts. 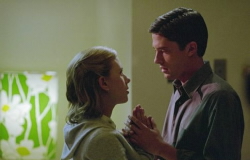 Taking this into consideration, maybe I was expecting too much from In Good Company. There was very little wrong with this film, it just wasn’t as good as it should have been.

All the lead performers do a fantastic job. Dennis Quaid is an old hand, sure, but Topher Grace showed that he could keep up with him (and not to mention Malcolm McDowell). Scarlett Johansson’s lips may be on the large side (Mark has philemaphobia, don’t listen to him), but she was great nonetheless in a small role.

Overall however, I found the film to be a little flat. It wasn’t so much the pace (come on, I loved The Conversation and Lost In Translation), but there were simply too many voids where the script wasn’t quite as clever as I’d hoped, or we were simply treading water. Rather than understatement I felt it was a case of lack of substance. And yes, a lot of the plot is telegraphed from a long way away – there are very few surprises here.

I did love the juxtaposition of the old and the new, of the personable and the corporate, and a vital part of In Good Company is the fact that both Dan and Carter are good at their jobs in completely different ways. There is a fairly anti-corporate mood here, but I never felt the issue was forced too blatantly, rather more like a fatalistic common sense.

In Good Company would have been more enjoyable had my expectations been lower. It’s a decent drama/comedy with some fine performances, even if there is nothing that particularly stands out.