Here in Australia we’ve had to wait ten months for this film to appear on our screens. I imagine distributors wanted a bit of a gap between Christopher Nolan’s The Prestige and Neil Burger’s The Illusionist, and – however frustrating – the move does make sense, because these films share more than a little in common. In turn of the century Vienna, illusionist Eisenheim is unparalleled in his field, and his performances have most of the city in awe of him. Soon questions are raised as to whether they are merely tricks being performed… or something else. But there the similarities stop. 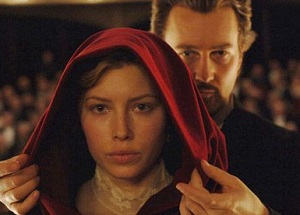 The Illusionist is a much more subtle film, and its languid pace is instantly at odds with The Prestige’s ‘look at me! Look at me!’ approach to filmmaking. This tale isn’t afraid to take its time and there are many moments devoid of dialogue. I don’t think I’ve ever seen Edward Norton so quietly spoken. His beard alone is a work of art but his ever so subtle performance is enthralling also. There’s very little in the way of ostentatious showmanship present in his performance, instead a lot of furrowed brows and deep concentration. Paul Giamatti plays a wonderfully conflicted character, having to choose between what is morally right and what is best for his career and social standing. Rufus Sewell plays the jealous lover (surprise, surprise!) whilst Jessica Biel is stunning as the Countess Sophie (it’s hard to believe she was the muscle-clad action hero from Stealth). Unfortunately, there are a lot of character developments that could have taken place but don’t. The narrative is simply a little too sparse. Nolan’s film had enough characters and plot developments that it felt complete, whereas Burger’s generally seems to be lacking in subtext.

Phillip Glass’ score is pretty much constant, and sadly a little too reminiscent of previous work. After his brilliant (yet overbearing) approach in Notes on a Scandal the music here is a little disappointing. The cinematography is beautiful, and the filmmakers have gone to great lengths to make this period piece look authentic – complete with the old fashioned mechanical closing of the iris instead of a cut to black.

Alas The Illusionist fails in a way similar to The Prestige – it’s rather predictable. There’s nothing more disappointing than a bad magician (‘Mummy I can see the coin – it’s in his other hand!’), and both films go out of their way to try and be tricky only to fail. Even more annoying, The Illusionist doesn’t explain all of its ambiguities, and we’re left with a couple of very frustrating unanswered questions.