I, Robot is an intelligent thriller, clearly drawing much from its source material. Having not read the original Asimov texts, I can’t comment on how well this book to film transfer has been done. Stuart commented afterwards that the book must have been a lot deeper still, but we were both satisfied greatly by this very enjoyable film. Some of the plot points have to have come from a novel, they are beyond the capabilities of the average screenwriter to even fathom, let alone imagine. I love Will Smith. I admit it. I liked him in ID4, Bad Boys, Wild Wild West – pretty much everything he’s been in. I even liked the tv series ‘The Fresh Prince of Bel Air’. So I awaited this new Smith film with anticipation, and as usual he didn’t disappoint me. He has such charm and wit, that he can pull off the comic relief parts as well as the action and drama. He is quite versatile really, even if at times he chooses to be in shit films, like Bad Boys 2 or The Legend of Bagger Vance. Again, he plays the slighted cop to perfection, bringing us onside immediately, and never letting us go.

Moynahan doesn’t have quite the same presence, which is a little disappointing after her role in The Recruit, in which she was excellent. She really has a very limited role in I, Robot however, in spite of her large amount of screen time, so it’s a bit harsh to judge her. Cromwell and Greenwood are both good actors, but play small turns only. The real star is the robot, played by Alan Tudyk. Following on from Gollum in The Lord of The Rings series, Tudyk gives a real personality to the CGI Sonny.

The animation and SFX are top-notch – some of the fights involving Sonny are awesome. There are occasional glitches and blue-screen issues, particularly in the scene shown at left, but generally speaking it has been well done. Sound is great, and the cinematography was only at times annoying, occasionally lapsing into the modern disease of rapid editing that stops any comfortable watching of the action. Thank goodness there was no discernible Will Smith anthem related to I, Robot – that would have really detracted, and I’m glad he showed restraint this time around.

I, Robot is very enjoyable, and has a quiet depth and subtlety only dreamt of in other action films. Themes of racism and technophobia are explored, and the question of what makes someone human is an important one. Can a robot become human? What are the qualities in the human mind or soul that differentiate us from other species? (The river sequence is extremely important here.) I, Robot touches on all of this, and yet still remains an exciting action film. This is the strength of science-fiction that some people just don’t get.

I hope you do…

I actually only learnt the day before the Australian release that I, Robot was directed by Alex Proyas. His name didn’t seem to be a part of the (incredibly extensive) ad campaign, which was surprising. As soon as I found out he was involved I became a lot more interested in going along to see it. 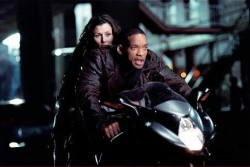 I agree with Mark in that I usually have no troubles watching Will Smith. But in I, Robot, I actually thought that Will Smith lacked his usual charm. It seemed as though they couldn’t decide whether they wanted him to play the straight man or not. As such, it mean that the humour in this film was often off-key. I almost would have preferred to see this film played out with no comedic moments – we know that Smith can play it straight, as evidenced in his early film The Six Degrees Of Separation.

I really enjoyed this movie. The script had its dull moments, and it often fell victim to the Hollywood vice of overexplaining things, but it never got boring. Proyas certainly kept the pace up in this film – one which could have easily become overlong in someone else’s hands (say for instance a certain Spielberg). The action is awesome, and Proyas obviously knows how to bring inventive violence to the screen. He also seems to have mastered the art of having battles between entirely CGI characters – other filmmakers could learn from this. The special effects are strange – early on we’re subjected to some of the worst blue screen moments ever put on film (not quite on par with The Two Towers, but close), but then the CGI stuff is often astounding. 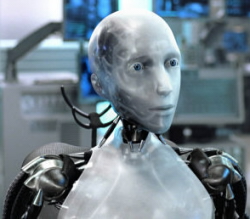 Sonny the robot is incredible. He belongs up there with the entirely digital characters that are not only well created, but well acted as well. He is the standout in this film.

I could have done with a more intricate plot – there’s very little for the supporting characters to do. It’s hard to be surprised when an ad campaign leaves nothing to the imagination. But then again, it would have been hard to sell, a little like Deep Impact. Although I haven’t read the books by Asimov, I’m almost certain that there was a lot of dumbing down going on.

This film thoroughly entertained, but I would have liked if it had been a little more complex. The average script is turned into a great film, however, courtesy of Mr Proyas. There were moments of Proyas magic which echoed Dark City, a film that astounded me when I first saw it on the day it was released (and the subsequent four cinema screenings I attended).