While many critics – particularly those based in New York – have focussed on the portrayal of the city abandoned in their reviews of I Am Legend, the remarkable feature of the movie isn’t the city or the photophobic monsters that have over-run it… it is that the movie is just not that affecting.

Robert Neville (Will Smith) is an Army scientist, working on the cure to a devastating mutation of a supposed viral ‘cure for cancer’ that has swept through the population of New York. Told in two time periods – 2009 and then 2012 after the holocaust – Neville attempts to get his family out of the soon-to-be quarantined city while at the same time being shown hunting deer and living alone in what is left. He continues to try to find a cure for the infection that has seemingly left him the only unaffected person alive, while transmitting a daily plea for any survivors to meet him at midday in broad daylight. The mutated viral cancer ‘cure’ has in fact killed 90% of the world’s population, while turning the majority of the remainder into disfigured and extremely aggressive zombies, who Neville notes seem to have devolved to the point they have lost any kind of social behaviour.

The long set-up sequences are the best of the film, with the imagery of New York after three years of neglect quite striking. Neville drives fast cars around the streets, hunts wild animals that have moved into town, raids video stores for distraction and has conversations with mannequins that demonstrate his isolation and loneliness. Smith is just so charismatic as Neville, who wins the audience over in spite of demonstrating what are clearly signs of mental instability. His ‘everyman’ quality is used to great effect in allowing the audience to consider just for a moment what this kind of isolation truly would be like.

Less effective are the horror/thriller sections in which Neville must fight the zombies to stay alive – it is in this mid-section that the film becomes a bit lost. The ‘infected’ are given confusing and inconsistent qualities – or at least their capabilities and weaknesses are never properly explained – and the actions of some hint at greater awareness of their own plight than the sole survivor (who just happens to be the Army’s expert!) gives them credit for. There is even a suggestion of emotion, planning and cooperation within the zombies, which is contradicted by their behaviour as ‘fodder’ for most of their screen time. Ultimately, it is the failure to clarify the extent of the damage to the infected – or rather, the extent of their retention of their humanity – that lets I Am Legend become so bogged down.

While the imagery of New York is quite striking, Neville’s action sequences are engulfed by the modern-day plague of handheld photography. The pacing isn’t quite right, and the failure to adequately define the zombies limits the impact of the latter stages of the film. Unfortunately, I Am Legend has all the qualities that could have made it a great science fiction thriller, yet it never achieves its potential in spite of the absolute charm of Smith.

Will Smith’s latest blockbuster is a well made yet disappointing remake of The Omega Man (which was in turn based on ‘I Am Legend’ by Richard Matheson). For those who remember the 1971 film, they may or may not be pleased to learn that this one is devoid of Afros, though still features a large number of manikins. Charlton ‘from my cold, dead hands’ Heston would be proud of Will Smith, going to sleep curled up with his rifle, and as opposed to the oft-seasick Mark, I actually enjoyed the action scenes.

The first half is definitely the best part of the film. The empty streets of New York are eerie enough, and the deliberate absence of music only adds to the mood. Smith’s onscreen chemistry with his German Shepard Sam (played by Abby) is great also. The middle section is not quite as good, and the final act really lets us down. There is a last minute diversion that not only ignores potential set up by the first act, but – shockingly – attempts to imitate one of my top ten movies of all time (and fails). 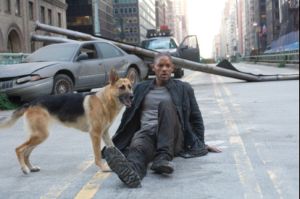 As Mark said, the suggestion that there’s more to the zombies than meets the eye is simply ignored, possibly because it resembled the other ‘Will Smith versus a bunch of identical CGI nasties’ movie, I, Robot.

This movie will kick arse at the box office (as proven by the fact I couldn’t actually get in to any of the three Thursday night sessions), but then again so do all Will Smith movies, even Wild Wild West and Hitch. Little wonder I heard rumours of him setting his sights on the White House – everyone loves Will. He does perform to his usual high standard here, but that final act really puts a damper on the narrative – not only is it gauche compared to what has come before, his character’s new direction feels incongruous.

The monsters are passable, though don’t match up to the high standard set by the digitally enhanced scenery. They look a little too smooth and fluid to be real. Their shrieks are well handled, however, and much of the shock factor relies on the sound effects.

Whilst it may be the third adaptation of Matheson’s book, the film is really competing with 28 Days Later… and its sequel, and in this manner it fails. Where they were brutal and uncompromising, this film seems both unsure and eager to please.

←Aliens vs. Predator: Requiem I Served the King of England→