Shirley Henderson yet again. It seems I’m making a habit of seeing her films (24 Hour Party People, Wilbur Wants To Kill Himself). Unfortunately this was one of her bad career moves. 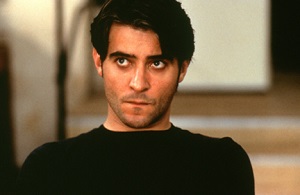 Hypnotic starts out with a great opening title sequence, but then soon collapses into a tacky supernatural thriller. This kind of film has had its time in the spotlight, and it’s now time for studios to leave it alone for a while. Hypnotic kind of plays like a lesser Ninth Gate (arguably a tautology in itself…).

This is a BBC film, and, as such, would have been quite acceptable if I had seen it in two parts on the ABC here in Australia. The budget, acting and script is all a bit off-kilter, and simply isn’t up to feature film standard.

It’s sad to see Miranda Otto here, an absolute waste of a great actor, but thankfully I’m sure that she will be remembered for her bout in The Lord Of The Rings: The Return Of The King rather than her role in Hypnotic.

I was quite prepared to turn the film off at the halfway mark, but then it seemed to pick up towards the end. There’s maybe one surprise in this film, and a whole lot of lazy narrative connections made in a lacklustre fashion.