Boy, was I charged about this film! I knew that there was no way it would come even close to the original, but all the same I was pretty excited.

On the whole, Cube 2 did not disappoint too much. 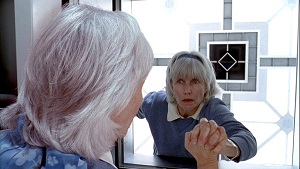 I must really be biased however, since in the opening moments it already broke a rule that was upheld in the first film and should have been carried over to the sequel – we see outside the cube. One of the best parts of the original is that the whole film took place within the cube, and we were never quite sure what was outside (I’m betting it looked kinda like that big shimmery thing out in the middle of the desert in the Filter film clip.)

The first film was a success despite the lack of budget, and an inspiration to any independent filmmakers out there who think they can’t make a science fiction picture without money. Admittedly the CGI shots in Cube were donated, but even had the film not contained them it would have worked.

Cube 2 however had a bucketload of money thrown at it. There are some truly awesome special effects in this film (to balance out some of the awful props), and in some cases a few too many special effects.

The concept was interesting. The sequel had to take the cube at least one step further. However in Hypercube we seem to have jumped aeons ahead in terms of the setup. There are simply too few rules. In the first film we quickly learnt what could and couldn’t be achieved within the environment, and this not only helped us suspend disbelief almost straight away, but it also gave us something to be scared of. In Cube 2, practically anything can happen, and as a consequence it was very hard to feel nervous, in suspense or excited.

I did like the story, but unfortunately it was hindered by a bad, bad script. Some of the lines are so tacky it’s hard to believe that we’re supposed to be taking the film seriously. There’s a hell of a lot of theatre acting going on in this film, and I’m not sure if that is the fault of the actors or the writing or the direction. Don’t get me wrong, it’s good theatre acting, but in a medium where one can go right up to the actors’ faces it doesn’t pay to be overacting.

So. I was excited about the release of this film, and to a certain extent it was satisfying. It built upon a solid concept and took it further. But it could never match up the original. As far as sequels go, however, it’s certainly one of the better ones.