An astonishing look at the soldiers that make up an Army Explosive Ordnance Disposal team on duty in Baghdad, The Hurt Locker is a gruelling experience that may test its audience, but the payoff is remarkable.

When dealing with suspected IEDs (Improvised Explosive Devices), the disposal unit must face a potentially hostile workplace, with an abundance of locals of whom any one may be an enemy. When a new member joins Bravo Company’s EOD unit, his cavalier attitude will cause conflict with the other members of his team – conflict within a team that could lead to their deaths. Whether they will survive one another is as much a concern as the risk they face from enemy insurgents.

Director Katherine Bigelow elects to comply with what is apparently a requirement when making a film about Iraq – she favours handheld camerawork with a grainy, washed-out look to generate the ‘feeling’ of being on the ground with the troops. This has almost become cliche, and yet in The Hurt Locker there is a sense that this is the right approach. When combined with prolonged takes and scenes that seem to last far longer than one may expect, the effect is of being dropped in the middle of the action as an embedded observer (just as the writer, Mark Boal, was, prompting this film). This is a remarkable achievement.

The action scenes in The Hurt Locker are gruelling marathons that will require a high level of both attention and stamina, and one walks out of the cinema drawn and fatigued. These scenes are shot with little release of tension, with Bigelow preferring to rachet up the pressure notch by notch until, when the sequence finally finishes, there is a sense of pure relief.

The performances are brilliant, with Jeremy Renner especially standing out as the cocksure bomb-tech Staff Sergeant William James. He manages the bravado of a man used to risking his life as his job with ease, while also completing the out-of-combat sequences with aplomb. This is really his movie, and he has taken charge and delivered. Around him, Anthony Mackie and Brian Geraghty as his unfortunate new team members are just as strong.

The Hurt Locker makes the more horrifying aspects of these men’s experiences seem very real, and one can’t help but be affected by the darkness that is all around them. It seems incredible that anyone could be capable of performing these jobs, and the film attempts to explain why at least some of them do. In this respect, it is a little less successful, as on its completion it still seems bizarre that anyone could volunteer for this.

As an action thriller, The Hurt Locker is extremely well made, and as an Iraq War film it has no peer – including the far less impressive In the Valley of Elah, which was also written by Boal. Highly recommended.

It’s taken me seven months or so but I have finally seen the film that Mark won’t shut up about. This is one of those rare occasions when I actually really enjoyed an Oscar-winning best film (my top ten rarely shares a film with the Oscars list) and it’s about time the best director gong was finally awarded to a woman. I haven’t been a huge fan of Bigelow in the past (excepting Point Break) but she definitely deserved a nod for this one.

There are a couple of things that were a point of contention for me with The Hurt Locker. 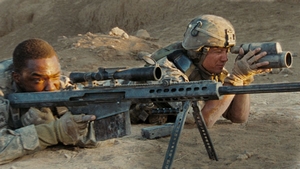 Firstly, Staff Sergeant William James seems to break the rules every single chance he gets – and I mean every single time. Surely there’s some kind of accountability in the US Army? I’d like to think so anyway. It might sound picky (“It’s a movie, it’s not real life!”) but I found this more than a little distracting when other parts of the film focussed on protocol and procedure in a way that few other war movies do. Whilst James is the leader of their group of three, it’s hard to believe that he wouldn’t face any reprimand or court martial for putting his men in an unnecessary danger, which he does with unflagging regularity.

Secondly – and this isn’t so much a problem with the film than with the reactions to it – I keep hearing that its bipartisan nature is to be applauded, but I can’t see how this film is bipartisan at all. It’s basically about a bunch of people slowly going crazy because of the horrid job they do – there was nothing in the film that said what they were doing was worthwhile, rather they all needed a decade’s worth of therapy to begin to even understand their problems. Maybe it’s an inkblot thing, but I certainly didn’t leave with the feeling that the war had achieved much good.

Jeremy Renner is fantastic. He manages to make James ballsy without turning into an action hero. Actually, the whole film straddles that line. It is a great action movie but somehow manages to be gritty and full of emotion at the same time. His brothers in arms, Sergeant Sanborn (Anthony Mackie) and Specialist Eldridge (Brian Geraghty) strike a perfect balance with his – let’s face it – almost total insanity. There are a couple of big name cameos also, doing their best to be unrecognisable.

The suspense is great. Even though it’s pretty clear how each scene will end (The Hurt Locker doesn’t have much in the way of surprises), the tension is palpable for almost the entire duration. Those who generally have little love for the war movie genre (like myself) will still really enjoy The Hurt Locker’s mix of suspense and action.