I didn’t get around to seeing the first How to Train Your Dragon until it was released on disc, but I was pleasantly surprised at how infectiously entertaining that film was. Historically, I haven’t been the biggest fan of Dreamworks Animation’s features. I didn’t think much of Kung Fu Panda or Madagascar, and I never even liked the first Shrek, let alone the oft-derided sequels. Then there was The Croods, which started out promising but turned into a different film entirely (I suspect as a consequence of last-minute rewrites). 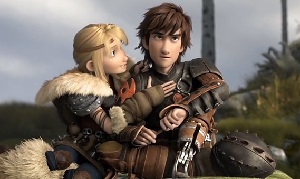 I’m pleased to announce that How to Train Your Dragon 2 is almost as good as its predecessor. Set five years later, it sees Hiccup mapping out unknown lands with the help of Toothless, whilst his father desperately wants him to step up and replace him as chief of Berk. Hiccup and Astrid soon discover that the villagers have a new enemy to fear, however, in the shape of Drago Bludvist.

The film is every bit as beautiful as the first. The animation is frequently jaw-dropping, and there are a number wonderfully realised scenes. This doesn’t feel like a conveyer-belt type animation, and no corners have been cut.

The action is great, and the dragon riding itself is every bit as wondrous as it should be. The new dragons look terrific, even if they are still trying to impress us with bigger and bigger beasts. (I hope that they don’t continue this trend with the third instalment; the critters in this one already rival Godzilla.)

So what’s wrong with the film? Not much. It’s so high octane and jam-packed with epic, revelatory moments that it lacks some of the charm present in the first film. In How to Train Your Dragon, some of the best scenes were the quieter moments that featured Hiccup and Toothless getting to know each other; here we don’t get that. Secondly, it’s simply not as laugh-out-loud amusing as the first film.

But these are minor complaints. I like the fact that Dreamworks didn’t rush this one, instead letting four years pass between the films. Of course, How to Train Your Dragon 3 is due out in 2016, so we may well see a drop in quality by that stage. But until that time, rest assured that there’s a lot to love here, and it’s one of the better children’s animated sequels out there.

←Maleficent Dawn of the Planet of the Apes→

How to Train Your Dragon 2