Over the years filmmakers have taken advantage time and time again of the fact that the movie going public seems to have a fascination for prostitution. From glossy productions (Pretty Woman) to disturbingly down and dirty pieces (Stella Does Tricks) we’ve been privy to the lives of (predominantly) women making a living strutting their stuff for men. This time around it’s the beautiful Monica Bellucci (The Brothers Grimm) selling herself to the rather unassuming Bernard Campan in How Much Do You Love Me?, a romance of sorts that is equal parts subtle and ostentatious. 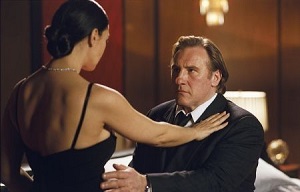 The film constantly lulls one into a false sense of security – muted tones and quietly spoken dialogue – until suddenly filling our ears with opera or jazz, and overexposing proceedings so that the characters are bathed in a brilliant white light. This often coincides with the ‘unveiling’ of Bellucci, who is pretty much presented as the epitome of feminine sexuality, and every man’s dream. Paradoxically however, this film isn’t all that sexually explicit – more often it is the reactions of the male characters that allude to what could happen next.

Unfortunately the film was a little too dry for me. Neither Bellucci nor Campan’s characters appealed, and I never felt for their predicament, even when disruption appeared in the form of Gerard Depardieu (36 Quai des Orfèvres). The deliberately farcical nature of many scenes (usually in response to Bellucci’s mostly bra-less appearances) jarred, preventing me from any commitment to the characters. The setting felt isolated, even when they were in the middle of the city, and rather than focussing the attention this tactic merely made the experience all the more sterile.

The performances seem constrained and the surroundings are bland. Bellucci usually impresses, but here her confidence seems merely insipid. Campan is convincing, but the script has him acting rather inconsistently from scene to scene. Finally, Depardieu’s appearance feels merely lazy, but then again I’ve found him (at least in recent years) to be rather overrated. Together the three simply failed to gel (or clash) effectively whenever they interacted. If I’d been given a chance to feel for the characters’ predicament, I may have enjoyed this more.

Unlike many men, I’m not always fascinated by large breasts. I admit this only because that seems to have been the only point of what is a rather pointless film.

Monica Bellucci is certainly well cast as Bertrand Blier’s anti-heroine; her curves amply fill the role Blier seems to have had in mind for them. Aside from providing visual decoration to what perhaps was trying to be a meditation on the power of lust and love, Bellucci’s Daniela is rather bland – her character’s motivations so well hidden as to be obtuse, when surely common sense would reveal what drives her. 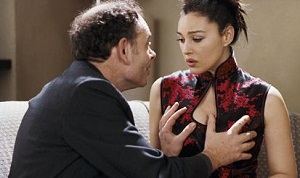 Her performance is strangely inadequate, considering she was the central focus of the entire film, and much of the blame for its failure must rest on her (and Blier’s) shoulders.

Gérard Depardieu (Charly) is present in yet another French film to reach these shores – it seems one can’t release a French import here that doesn’t feature him in some way – but has little impact other than to make the film somewhat more comical. Bernard Campan at least holds his own against the machinations of Daniela and Charly, and the only moments of either mirth or pathos surround his weak-hearted hero François.

The bizarre use of lighting and sound effects to highlight particular moments, as Stuart mentions above, in fact only detract from what is already a fairly dull story, and the insertion of even more bizarre ‘comic relief’ characters contributes to a rather odd tone to the whole film. One is never entirely sure whether this is fact, fable or farce, and the varying techniques used to distract one from the inadequate plot and characters eventually end up simply being annoying.

Pretending at serious and thoughtful and yet actually only exploitative and drab, How Much Do You Love Me? is one of the weaker French films to reach Australian screens in recent years. Certainly not worthy of its popularity at the Alliance Française French Film Festival, it can only be recommended to those keen to see more of Bellucci, so to speak.

←V for Vendetta Inside Man→

How Much Do You Love Me?